In Review: Of Mice And Men at Manchester Academy 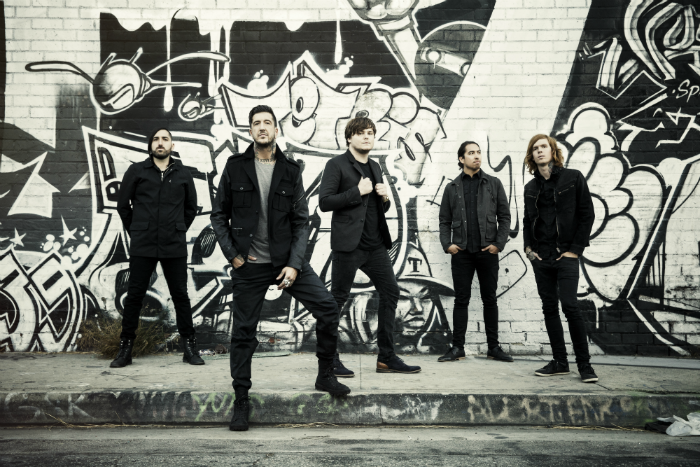 There’s a white-hot atmosphere inside Manchester Academy.  Volumes and The Amity Affliction have brought an already electric crowd to the brink of bursting with excitement, awaiting Of Mice And Men.  As they take to the stage, ripping into Public Service Announcement, there are thunderous cheers, the flashing lights coming from the stage only serve to heighten mood, the screams become louder and louder and there is truly stadium feel to the evening … and they are not yet half way through the first song.  It’s been an explosive start and it’s set to carry on in the same vein.

Of Mice And Men have been touring with Linkin Park, they have performed at countless festivals, headlining Reading and Leeds, and it’s clear that they have picked up a real knack for live shows.  They shift easily between contrasting numbers, whether it’s aggressive pieces, dominated by bullet-like drums or (slightly) slower and more melodic works such as Another You, for which Austin Carlile calls for phone lights to be held in the air as a moody, epic feeling comes down over the venue.  And whilst the Full Circle Tour may showcase their latest album Restoring Force, the setlist includes enough of their older material to master the fine balance between the fresh and the established, including the excellent O.G. Loko which has arms in the air with delight throughout the venue, as tracks from their eponymous 2010 debut and 2011’s The Flood feature.

In putting on an outstanding performance, they are full of energy, charisma and aggression and they keep going, barely pausing for breath, as a delighted, packed out Academy watches, cheers and screams in appreciation.

As a band, their performance is tight and controlled – Carlile’s vocal work is on top form, as is Aaron Pauley’s vocal contribution.  The drums and bass provide a great heaviness and drive, whilst the rapier-like guitar work gives it a stunning edge.

Throughout the show, they are the masters of the stage and the crowd love it, continually erupting, whether to Carlile’s devil sign to a glorious red backlight, or to his demands for circle pits, which draw in practically the whole venue.  And the cheers are almost deafening as the opening strings of Feels Like Forever ring out.  It’s the stand out track of the night as the fans sing back the harmonies at the tops of their voices and is the perfect contrast to their thus-far heavier setlist.  The energetic crowd shows no signs of running out of steam as it again bounces and sings along again to Would You Still Be There, featuring some great arches and guitar work.

They bring matters and indeed the Full Circle Tour to a close in Manchester.  The crowd is happy and whilst the adrenaline may still be pumping, the fans are truly fulfilled.  But there’s no resting for Of Mice And Men as in just two weeks they are back on the road in the US.  Judging by this performance, they will have many happy fans on that side of the Atlantic and many on this side desperate for them to return.