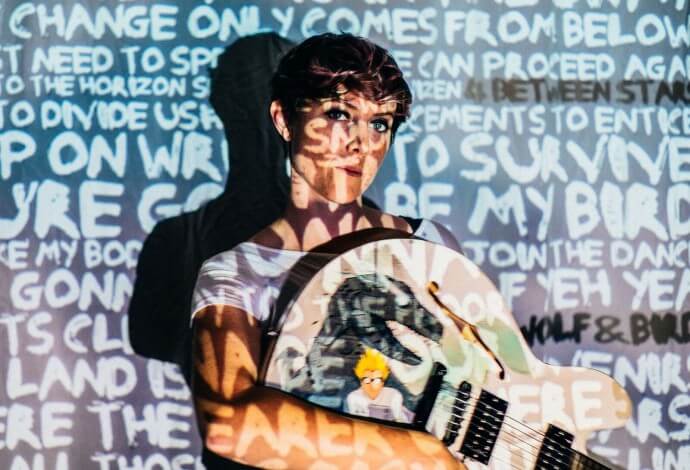 She Drew The Gun open an eleven date UK tour at Manchester’s Deaf Institute.  The tour follows a run of dates supporting The Coral and the release of latest single Something For The Pain from 2018’s album Revolution Of Mind.

Speaking about Something For The Pain, Louisa Roach, frontwoman, guitarist and songwriter commented, “The song is about a conversation with a refugee set in the future.  At the point where the refugee crisis has become so big and automation so ubiquitous, that what is left of the first world finally make the decision to become a people rather than profit based society, one that treats everybody as citizens giving them their basic needs. In the video we played with the idea of that future exchange using ‘Jenny Holzer’ style text art to create a narrative and dancers to represent the conversation.”

The track is the second single to be taken from the Wirral four-piece’s second album Revolution Of Mind.  The album was released in October 2018 and became a BBC 6Music Album Of The Year.  Revolution Of Mind was produced by The Coral’s James Skelly at Liverpool’s Parr Street Studios and is the follow up to 2016’s debut Memories Of Another Future.

When do She Drew The Gun headline at Manchester’s Deaf Institute?