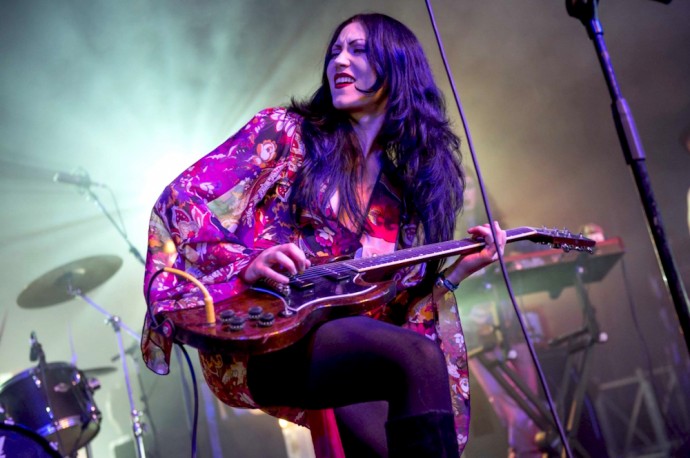 Singer, songwriter and multi-instrumentalist Rosalie Cunningham releases her debut solo album on 5 July ahead of a Manchester gig at Night People.

Ever since her critically acclaimed former band Purson played their final gig in late 2016, Rosalie Cunningham has been working on solo material for this, her debut album.

The album features eight genre-spanning tracks showcasing stylistic changes.  The psychedelic roots remain in place in tracks Ride On My Bike and Riddles and Games, as does the drama of her previous work.  Theatrical elements abound in songs Fuck Love and A Yarn From A Wheel, whilst ‘60s and ‘70s influences glisten.

The self titled album was recorded in three different studios, with an emphasis on analogue equipment.  Rosalie explains, “The approach I started with was very modern, at a high-end digital studio. I soon realised it wasn’t for me and went right back to basics. I took it home, stripped it right down, experimenting with tape machine tricks, running mics down corridors and using radio broadcasting mics to get the guitar sound. After that I went to Gizzard, an analogue studio I’ve worked in before, for the final mix; all of which was done live. Being able to take time over arrangements without pressure meant that everything felt right, without being contrived.”

Rosalie Cunningham’s debut album is released on 5 July.  In support of the release, she will embark on a nine date UK tour, including Manchester’s Night People.

When does Rosalie Cunningham perform at Night People Manchester?