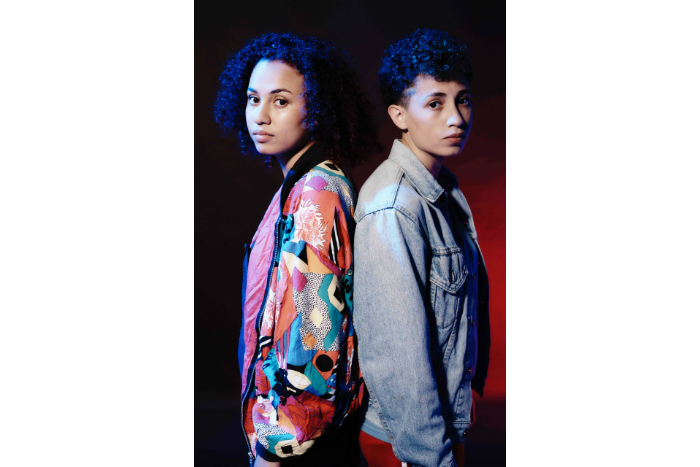 This all culminated with them being asked to headline the BBC Introducing stage at Latitude Festival.

Xylaroo have also been very busy out on the road since their first tour with Matt Berry last year. Winning over new audiences with Will Varley across the UK and most recently playing to stadiums and arenas on tour as special guests to Mika across Europe (17 dates, 7 countries and an estimated 90,000 fans). Playing to almost 20,000 people in Paris and with audiences often above 10,000, Xylaroo came back to the UK to play on the Camp Bestival mainstage, Boardmasters and Bestival in September.

This tour with Matt Berry and The Maypoles will see Xylaroo much more mature, accomplished and ready to wow with their album ready and equipped this time round.

Similar to many bands, the pair (Holly aged 25, Coco 23) are a product of their own environment. What makes them totally at odds with everyone else, however, is that their environment has been constantly shifting since day one. You could say they’ve been “on the road” their whole lives. By their early 20s they’d tallied up more air miles than all the members of The Traveling Wilburys put together. Today they’re based in Canning Town in London where they share a flat with two other friends. But where did they grow up?

“Well,” begins Coco, guitarist and the more extrovert of the two. “Holly was born in Papua New Guinea where mum’s from. Then we moved to Hong Kong and I was born there. Our dad is a civil engineer so we grew up in the Philippines, then Maidstone for ten years. After, we went to Sri Lanka. Then we came back to the UK once school was finished.” Holly interrupts. “You forgot Switzerland!” “Oh yeah,” retorts Coco. “For a little bit we lived in Switzerland.” It’s no surprise then that their sound, which could loosely – but only loosely – be described as ‘folk’, transcends local open mic scenes and of-the-moment genres.

Maidstone was where the duo began gigging (“around the Medway scene where all the bands were doing ska”), but it was really island life in Sri Lanka that added a rustic, vibrant flavour to their matter-of-fact, earthen songs. People would sing a lot in their village with guitars. Coco played from the age of 9. Holly was more confident singing. “I was hesitant there,” laughs Coco. “Holly has more of a natural voice but harmonies come pretty easily – maybe it’s a sister thing.” Despite having older siblings, it was the younger Chants who decided to stick together. Everything progressed at a gradual, comfortable pace. “It’s only in the last couple of years that we’ve considered ourselves a proper band,” says Coco. “When you’re sisters you don’t take yourselves as seriously. You play around in your living room.”

Today they discuss their upbringing, musical influences and aspirations at their kitchen table, taking turns puffing on self-rolled cigarettes, poking fun at each other and making light of some pretty serious memories, including one in which one of their homes burned down. “Nobody was in it but the guy who used to own it did a lot of DIY and there was a random electrical fault in the wall,” says Coco. “That was pretty rubbish actually.” The sisters’ lightness and optimism is infectious and the fact they stumbled upon music (their family weren’t musical, but dad did play Rolling Stones in the car a lot), renders it potentially easy to overlook the fact that they’ve happened upon something remarkably salient. Via their brand new deal with label Sunday Best, they thankfully now have a platform from which they can offer a bright perspective on the world.

The sound of Xylaroo isn’t so much in your face as it’s a comforting place for you to relax your face when you need some inspiration. Their biggest dreams at the moment are very simple: have songs that sound better than bedroom recordings, score some more free t-shirts from Adidas, continue to make each other smile. Above all, they want to tell stories – their stories. To borrow from the lyrics of ‘Sunshine’ itself: //All the good is worth the hard shit//. For these two, 2016 holds a lot of the former and hopefully zero of the rest.