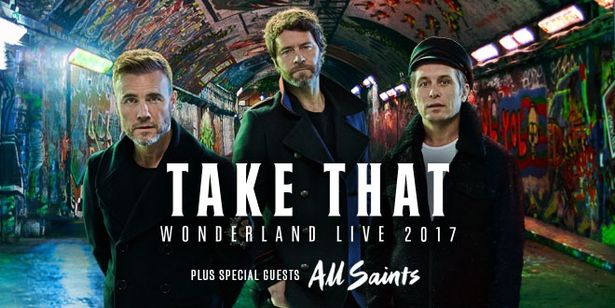 Take That have announced a 22 date, 10 city tour of the UK and Ireland which will see Gary, Mark and Howard bringing Wonderland Live to Manchester for four nights in May 2017.

The tour is in support of their new album Wonderland which is due for release in March 2017.

For the first time ever, the band’s main stage will be in the centre of the arena floor.

Take That’s Wonderland Live is the first time that fans will see the band perform brand new material from their forthcoming studio album Wonderland, due out in March, as well as their much-loved classics, performed in the round.

Take That are one of the UK’s most successful acts with an enviable career spanning three decades. The band have sold over 7.6 million concert tickets in their lifetime, setting the record for the fastest selling tour of all time in UK history when 1.34 million tickets were snapped up for their Progress Live Tour in less than 24 hours.