Previewed: Under The Concrete Waiting at The Lowry 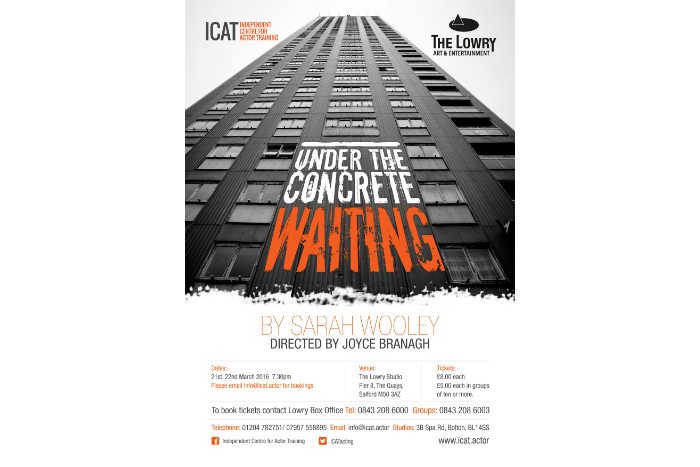 This year’s graduating students of the Independent Centre for Actor Training (ICAT) bring Sarah Wooley’s play Under The Concrete Waiting to production. Retelling the events in the Mexican town of Ciudad Juarez, Wooley’s brutal play is set in a forgotten housing estate where a woman is murdered and her body is found laid out on the road.  Then another woman vanishes.   In the city that inspired the play, it is estimated that, since 1993, as many as 250 women and girls have been raped and murdered in this border town.  In Joyce Branagh’s production for ICAT the location has been adapted from its original setting of a council housing scheme in the West of Scotland to an estate in North Manchester.

The play’s cast is nearing the end of its intensive two year Professional Actor Training course which culminates in Manchester and London Showcases.  ICAT’s course ethos is based on the belief that to train effectively and to meet the exacting industry standards, an student actor has to learn from actors and directors who work in the industry.  For this reason the staff in both the Manchester and London schools are working actors and directors – who have done and do earn their corn from performing.

Principle of ICAT, Simon Trinder, is an RSC actor and works regularly on stage, TV and radio.  You will see him later this year in series two of BBC’s Ordinary Lies.  He started the actor training school eight years ago to offer younger and inexperienced trainee actors a pathway to a serious career as an actor – without saddling them with a huge student debt.  This ethos of specific, intensive training is challenging the traditional notion of actor training and is bearing fruit as ICAT graduates are now working in the industry as actors.