In Review: Pudding Black by 1956 Theatre 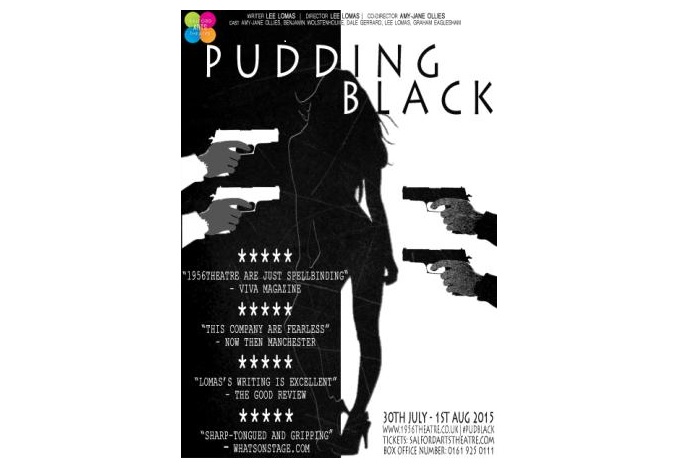 The 1956 Theatre have returned to Salford Arts Theatre, following their previous outstanding performance of Sexual Perversity in Chicago, with an original piece of work, Pudding Black, penned (and directed) by the 1956 Theatre’s own Managing Director Lee Lomas.

Pudding Black is a twist on the whodunit.  It’s witty, clever and deliciously dark.  The story centres around the murder of Carys (Amy-Jane Ollies, who also co-directs), her relationship with younger brother Cal (Dale Gerrard) and boyfriend Jason (Ben Wolstenholme).  The subsequent investigation is carried out by policemen Damien (Lee Lomas) and Nelson (who is performed exceptionally by Graham Eaglesham).

At the outset we witness a mysterious hand reaching around a door and a single gunshot sound.  All we know is that Carys has been killed by a male wearing a black hoodie.  As Pudding Blackprogresses, we learn that each character may have motive, each may even have the character and means, and that each does indeed own a black hoodie, and that they are all, in some way, linked leading to a clever finale.

Thankfully, as the story unfolds partially in flashback, this is not the end of Ollies, who performs excellently, evoking sympathy as the relationship with Jason (who shows a predisposition towards violence) unravels and her brother’s attentions begin to border on the inappropriate. 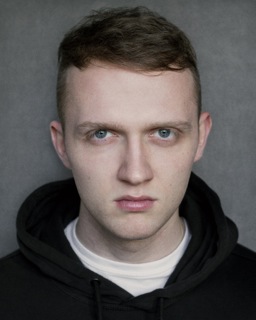 Lomas’ writing is bold and frequently near the knuckle, which allows for some wonderful interactions and verbal sparring, particularly between Damien and Nelson.  His clever penning of Nelson (and indeed Eaglesham’s performance) is one of the highlights, as we witness the numerous flaws in Nelson’s personality coming to the fore as the play progresses.  His crumbling character is intriguing and delightful as we start to wonder whether he may be the murderer, but he does pose an equally valid question about Damian’s secretive nature, as does Jason who alludes towards a shared history with the now-policeman.

Throughout the performance there are clever clues, verbal and visual, some delightfully subtle, as to the murderer’s identity, as well as plenty of misdirection as the culprit remains a mystery until almost the very end.

The stage and sets are used very well and the experience of having performed at Salford Arts Theatre previously would appear to have benefitted The 1956 Theatre in producing a play which moves quickly from scene to scene without the need for long pauses for stage resetting, whilst the lighting and musical interludes are used to differentiate between locations and times.  At times, the flashback moments do leave you wondering just how far back we have gone, but it does quickly become apparent.

This is another triumph for the impressive 1956 Theatre in terms of writing, directing and indeed acting, easily keeping the audience hooked and entertained.  In fact, it leaves only one question begging – just what is Damian’s past?  Perhaps there’s another tale to tell.