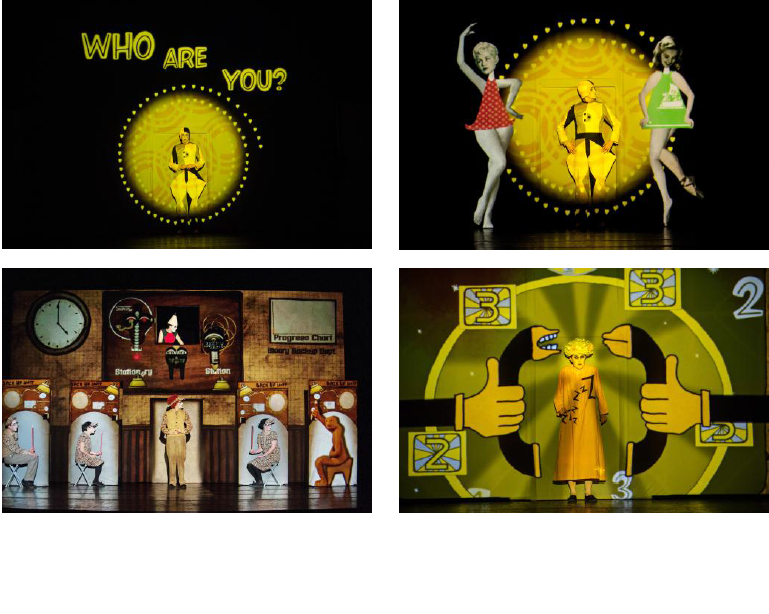 Summer may well be here, been and gone already or be set to start … it’s difficult to tell sometimes, but Home has announced three forthcoming autumn 2015 theatre productions.

Starting the season is Dead Dog in a Suitcase (and other love songs) which is scheduled to run from Friday 11 to Saturday 26 September.  Presented by Cornwall-based international touring company Kneehigh with Liverpool Everyman and Playhouse, the touring production is set to stop at Home.

A reworking of John Gay’s The Beggar’s opera, written by Carl Grose, Dead Dog in a Suitcase (and other love songs) is a twisted morality tale for our times.  Filled with wit, wonder and weirdness, it is presented with a new score of live music by Charles Hazlewood and directed by Artistic Director Mike Shepherd.  The music satire holds a mirror to contemporary society – confronting big business, corrupt institutions and urban myths.

“The story of the dead dog in the suitcase is a ‘genuine’ story”, says writer Carl Grose. “Google it. It’s urban myth. It’s modern folklore. And that feels like what our Beggar’s Opera is, too. If John Gay’s was highwaymen, prostitutes and street thieves; ours is about the mythic underbelly of now – corporate conspiracy, hit-men, warped Robin Hood-types, the end of civilisation, dead dogs in suitcases – all combined to create a portrait of a world hanging by a thread, in turns shocking, hilarious, heartfelt and absurd.”

Following Dead Dog in a Suitcase (and other love songs), comes the award-winning West End production Golem, making its return to the UK following stints in Salzburg, Taiwan, Paris and Moscow.  Golem will be performed at Home from Wednesday 7 to Saturday 17 October.

A visually arresting and satirical take on the misuse of technology, Golem follows the life of the extraordinarily ordinary Robert Robertson whose life is irrevocably disrupted when he purchases a golem – a creature who will improve the efficiency of his daily affairs and subsequently upgrades to the superior model Golem 2, leaving him controlled by Golem 2 rather than the way it should be.

Mixing live performance and music with film and animation, Golem is presented by the multi-award winning 1927 Theatre and shows a funny, mischievous and alarmingly relevant side to technology.

The final production announced for Home’s autumn run is award winning director Blanche McIntyre’s production of Ted Hughes’ translation of classic Greek play The Oresteia featuring a cast of six and accompaniment of a 50-strong chorus.  The Oresteia runs from Friday 23 October until Saturday 14 November 2015.

Playing on the themes of politics and justice, The Oresteia was first performed in 458BC and remains the only surviving Ancient Greek trilogy in existence, comprising three of the most important plays of all time – Agamemnon, Choephori and Eumenides – epic dramas of war, bloodshed, revenge and justice.

In Agamemnon, Clytemnestra prepares for her husband to come home. Ten years ago, Agamemnon murdered their child to buy the gods’ support for a dubious war. Far off their son, Orestes, waits – if Agamemnon is murdered, Orestes must avenge him. Choephori picks up the story with Orestes’ return and dramatises the creation of a mental state that can kill. Stopping the cycle of violence is the subject of Eumenides. It will need a total reconfiguring of the universe, from the demons of the underworld to the gods themselves, and requires the invention of a new concept: justice.

The action moves across time and space. Each cast member takes one role, swapping genders and ages through the plays: one Clytemnestra, one killer (Aegisthus/Orestes), one patriarch (Agamemnon/Electra/Apollo), and one truth-teller (Watchman/Cassandra/Nurse/Athena). With two chorus leaders, they move from gods to rulers to underworld characters of darkness, and all stops in-between.

In Review: Crocodiles at the Royal Exchange Theatre
In Review: Sexual Perversity in Chicago by the 1956 Theatre
Home to host exhibition on spamming and scamming