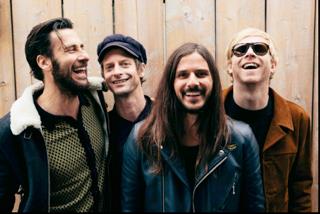 British rock’n’rollers The Temperance Movement hit Manchester Academy 2 on the back of their brand new studio album White Bear, which was released on 15 January.

The ten track blues-rock album White Bear is the follow-up to the band’s 2013 self-titled debut and was recorded with producer Sam Miller.

Opening with the swaggering ‘Three Bulleits’ (titled after the Bulleit brand of bourbon favoured by some of the band), White Bear runs the whole gamut of modern rock’n’roll. From the classic Faces/Crowes R&B stylings of ‘Get Yourself Free’ – which comes complete with a raw soul vocal from Campbell and Crosby, Stills & Nash-style harmonies from the band – to the explosive pace of the adrenaline-fuelled ‘Modern Massacre’, White Bear is a masterclass in songwriting from a band at the peak of their powers.

‘A Pleasant Peace I Feel’ delivers one of the most euphoric choruses you’ll hear in the whole of 2016, while ‘White Bear’ itself moves between tender moments and passionate fire, featuring blast-furnace guitars and Campbell’s powerhouse vocals. Finally, rounding off the album is ‘I Hope I’m Not Losing My Mind’, a stoned-soul ballad that demonstrates the finesse that lies beneath the band’s signature power.

Guitarist Paul Sayer confides, “White Bear is a real step on for us sonically and artistically.  Playing so many shows together over the last three years allowed us to develop a really clear idea of where we wanted to go with our next record.  When it came to making this album we had a bit more time and space to let our creativity go, and I’m incredibly proud of what we achieved.”

The Temperance Movement perform at Manchester Academy 2 on 24 January 2016.