In Review: Garbage at Manchester Academy 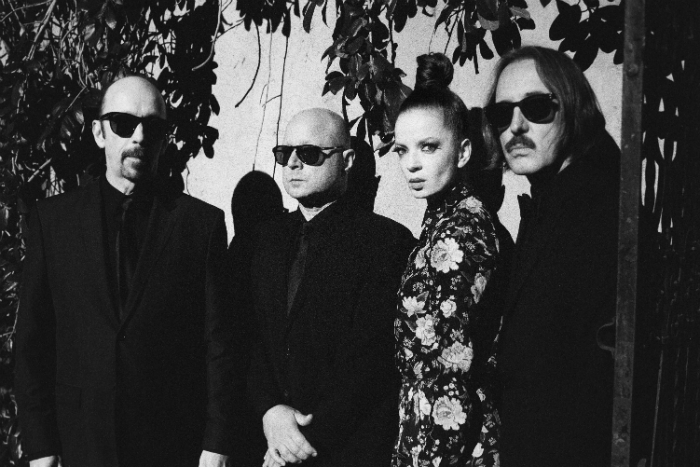 It seems apt that as Manchester Academy celebrates 25 years and runs a series of celebratory gigs, one of the acts which comes back is itself celebrating an anniversary – 20 years since the release of its sensational self-titled debut.  Garbage.

Before the gig starts, there’s a buzz around the venue.  The crowd is surprisingly mixed and some fans are sporting t-shirts which they appear to have purchased when Garbage were in this very venue some 20 years earlier.

There is a huge cheer as the lights are dimmed.  After a video montage to the sound of Subhuman, the band stands behind a white curtain.  The light behind them casting a silhouette before they launch into Supervixen – track number one of album number one.  As the curtain is pulled away the shouts and cheers continue

The gig marks a 20 year retrospective and the bulk of the setlist centres around the debut album and songs which were written around 1995/1996.  Through the evening and the substantial set they perform Queer, Dog New Tricks, Not My Idea (weaving in a touch of New Order’s Temptation), and Fix Me Now amongst others from their earliest material.  It’s a stark reminder of just how good that album is.

It’s up-tempo, guitar lead, at times aggressive.  Garbage is possibly their most pugnacious album and, live, it works a treat.   But there is time for more mellow moments as they slow things down with Milk. It’s a beautiful moment.  Arms are in the air, fans are singing along and Manson is the queen of the Academy.  My Lover’s Box is ramped up in pace from the album version and features a red hot opening before, almost seeming to toy with the crowd, Garbage slow things down again with Stroke of Luck, (which Manson mistakenly introduces as Stroke My Luck much to the band’s amusement) complete with moody lighting for a truly hypnotic feel.

Throughout the evening, Manson talks with the audience, giving them insights into meeting the band, the business, her own personality, Mancunian music and her fondness for the crew.  She’s clearly excited and happy to be performing and jokes about talking too much, even commenting about the potential for a £25,000 fine for breaching curfew.

They throw in to the mix some songs which Manson herself admits may be obscure and only known to the most diehard of fans as well as some covers amongst them #1 Crush, Driving Lesson and The Jam’s The Butterfly Collector (before which she makes a surprising personal confession about her sex life much to the crowd’s amusement).

As they bring the set to a close they push things to another level performing Only Happy When It Rains (opening with a sensational slow organ to accompany the vocals), Stupid Girl and Vow (complete with a touch of Stone Roses’ I Am The Resurrection).  Back to back these three songs work perfectly and have the crowd in raptures.

They return to the stage for an encore performing what Manson introduces as “the last obscure one” Trip My Wire and Vic Chesnutt’s Kick My Ass before rounding off with Automatic Systematic Habit and When I Grow Up.  It’s slightly surprising that the encore doesn’t feature tracks from Garbage itself, but nonetheless, it’s a strong finish and the crowd leave happy.