Previewed: Spur Of The Moment at Re:play 2015 Festival 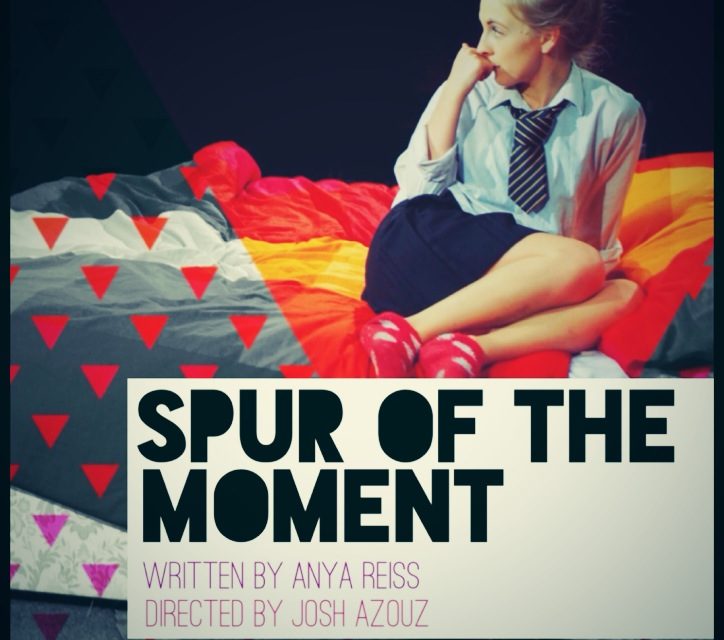 Award winning play to be performed at Home’s Re:play 2015 Festival

“Spur of the Moment is an award winning, Royal Court play that, in its own savage and comedic way, allows us to question the most provocative taboo of our age.”  Written by award winning playwright Anya Reiss, when she was only 17, it’s quite remarkable that the description of Spur Of The Moment stands up to scrutiny.  Taking on themes such as marriage, the difference between arbitrary boundaries and what we do in reality, family dynamics and inappropriate relationships, Spur Of The Moment is a play written by somebody who, at such an early age, had an astounding grasp of life, its quirks, challenges and quandaries, demonstrating a maturity beyond her years.

It’s a play which finds the young Delilah, on the verge of turning 13, dancing away to High School Musical and fantasising about the hot twenty-year old lodger Daniel, whilst her parents tear away at each other downstairs, their marriage at breaking point.  The only questions on Delilah’s mind – will Daniel come to her birthday party, and what will she do if he does?  The play makes the audience question their existing notion of attraction and impulsive behaviour and whether certain acts can be excusable in particular circumstances under momentary pressures and impulses, and considers the life-changing implications which spur of the moment decisions can have.

Spur of the Moment is a dynamic and brutal comedy, balancing poignancy and humour.  It was originally performed at and produced by ALRA North (the northern incarnation of the dual-based ALRA drama school which won The Stage’s School of the Year award in 2013) as a final production by third year students and has become the first drama school production to be chosen for Re:play.

Writer Anya Reiss’ debut play, Spur of the Moment, opened at The Royal Court and lead to the award of Best New Play at the TMA Awards and the receipt of Most Promising Playwright at the Evening Standard Awards.  Manchester theatre goers may well be familiar with her adaption of The Seagull for The Library Theatre.

Spur of the Moment at Re:play 2015 is a co-production between ALRA North and Deaf Dog, a Manchester based production company run by Joi Rouncefield, John Mulleady and Ellie Whitfield, whose previous productions include Loving Dick, Design 4 Living and The Allen Family Quiz, and incorporates Josh Azouz’s more abstract vision of its presentation.