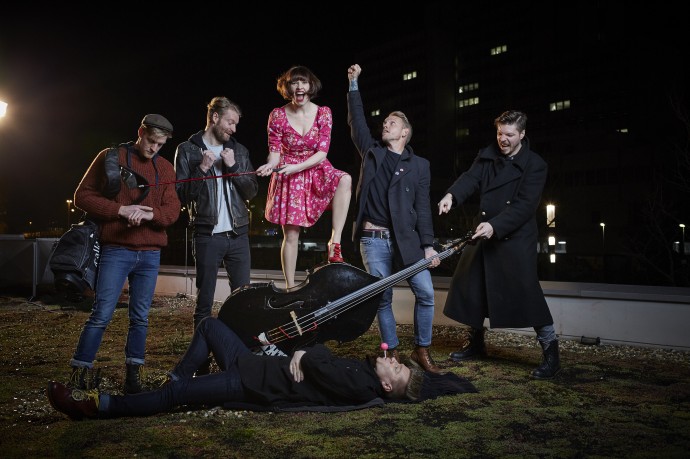 Skinny Lister are set to release their third studio album The Devil, The Heart and The Fight this Friday ahead of next week’s show at Manchester’s The Ruby Lounge.  The album is released through Xtra Mile Recordings.

With lead single Wanted – a fiery Elvis-gone-folk roar of an opener that sees frontman Dan Heptinstall saluting London, New York and Cairo in a song “about looking for life in the cities we’d visit” – The Devil, The Heart and The Fight comes out fists first.

If their folk debut album (Forge & Flagon, 2012) celebrated the sticks and their punkier second (Down On Deptford Broadway, 2015) blinked in the bright lights of London; their rocked-up third, sees them go global.

The album was written whilst the band were on the road, and recorded over five weeks in Newcastle Under Lyme’s Silk Mill Studio in May 2016 with producer Tristan Ivemy.  It promises to be a full-on rock record with eighties pop influences, punk vigour and a folk canvas filled with brutal honesty and near to the knuckle lyrics and touching on life on the road.

Skinny Lister have spent an exceptional amount of time on the road touring across the UK, Europe and North America to ever-increasing crowds. Their infectious, feel-good and uplifting performances are winning over fans all across the globe, whether its supporting label mate Frank Turner on his arena tours or headlining their own sold out shows across America, no doubt giving them plenty of material for their next release.

Skinny Lister perform at Manchester’s The Ruby Lounge on 5 October 2016.