In Review: The Ordinary Boys at Night and Day 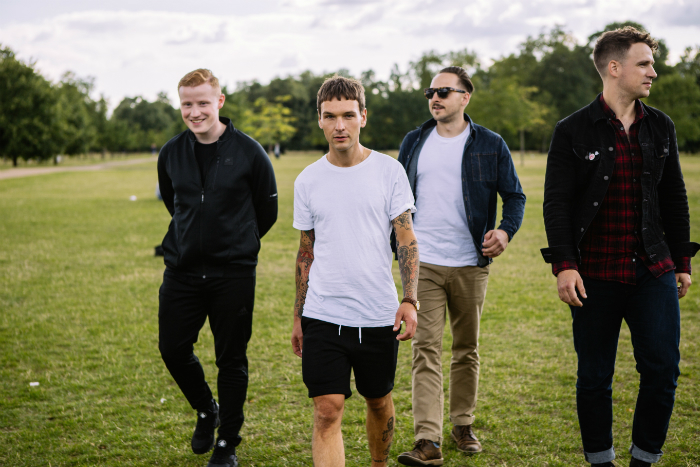 Seventeen dates in to a twenty seven show tour, The Ordinary Boys could be forgiven for taking things a little easier, slowing things down, taking a little breather and lowering the energy levels slightly.  But no.  There was no danger of that as Preston and the boys charged full tilt into Manchester, pitching up at Night and Day for a performance which had their fans cheering, dancing and singing back to them at every opportunity.

The buzz around the venue had been building and the crowd were certainly eager to see The Ordinary Boys take to the stage.   As they do so, there is a huge cheer.

They immediately launch in to About Tonight.  There is a heavy and fast guitar feel and the crowd are immediately bouncing around.  The vocals are a little subdued, but as some tweaks are made to the sound that is quickly resolved.

Wearing a James t-shirt in a nod to the location, Preston comes right to the edge of the stage as he plays guitar on Over The Counter – there is another huge pop from the crowd which continues to bounce.  The pace is fast and the energy levels unrivalled.  There is so much movement on stage that Preston even strikes his head on the overhead lights (he’s not the only one to do that tonight).

Their latest self-titled album features prominently in the set, but already seems well known by fans who continue to cheer and sing throughout.

The tempo of the tracks continues to be upbeat throughout the night as Four Letter Word and Talk Talk amongst others continue in the same vein.

That’s not to say that there is no variety.  Heart on the Line has a slightly slower feel to it and the crowd reaction is tremendous as Preston wanders around the stage performing Bubble by himself – it’s a moment which has a strong impact and delights.  Life Will Be The Death of Me also has a slightly more punk feel to it.

The songs resonate with the fans who lap up every moment.  Awkward, in particular, is a winner – filled with infectious riffs and a bassline.  The drums set the beat perfectly for Seaside with the roaring crowd standing in for the trumpets.  The crowd is indeed in the palm of Preston’s hands, although the role is reserved slightly as he throws his guitar down during Boys Will Be Boys taking himself in to the audience.

As they finish with the strong Do You Wanna Dance?,  the answer is an emphatic yes.  The crowd continues to show as much energy as The Ordinary Boys, bouncing, dancing, cheering and throwing their arms in the air.  As they leave the stage, the crowd is buzzing.  The set has been energetic and exhilarating – impressive for a band which must put this amount of effort in to their shows day in day out.  And as much as the fans have taken out of it, The Ordinary Boys appear to have enjoyed themselves equally as much – Preston commenting on how happy it makes him to see the fans singing back to him.

In Review: The Orwells at Gorilla
In Review: Jaws at Manchester Academy
The Stone Roses announce Manchester gigs