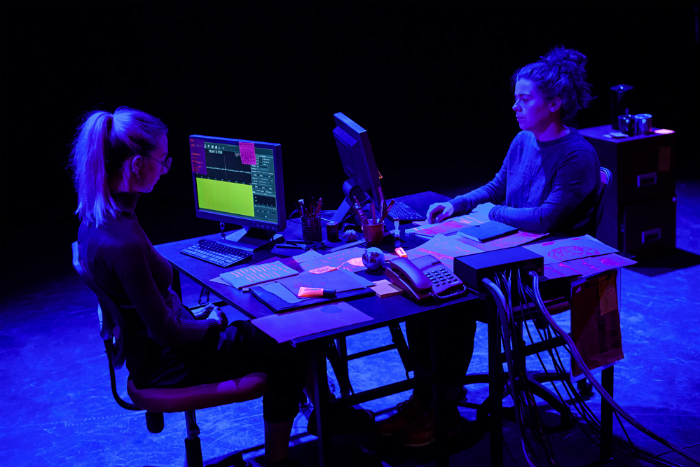 The production comes in collaboration with Footprint Theatre, the play’s creators, as it makes its debut UK tour.

What is Signals about?

Set in the control room of a remote radio telescope, Signals is a comedy that follows two radio astronomers and their search for alien life over the course of a number of years. At its heart, the play is about searching for meaning in a world we will never fully understand. It explores human connection, isolation, loneliness and how it feels to spend a lifetime searching for the intangible. There’s also some stuff about Jaffa Cakes!

Signals will resonate with anyone who has ever questioned their significance in an infinite universe. A comedy that asks how it feels to be lost in the cosmos with only each other and a cup of lukewarm tea for company.

Signals is performed by Eve Cowley and Immie Davies.  The play was written by Eve Cowley, Immie Davies, Elin Schofield and Isaac Whiting, with additional material by Trent Burton and Melinda Burton.

Speaking about the decision to present Signals, Trent Burton, Co-Director of The Cosmic Shambles Network commented, “We’re always looking for new voices to work with at The Cosmic Shambles Network and there was something about Signals that grabbed me.  Obviously the marriage of science, comedy and art is core to what we do at Shambles, but it wasn’t just that.  Or that it was interesting and funny, which it was, but it was the restraint and nuance in the storytelling.  They weren’t afraid of ambiguity and that’s something that I find is increasingly rare in young writers and performers.  And if science itself is anything, it’s a warm embrace of the unknown.  Neat bows aren’t always available”.

When does Signals come to Waterside Arts?