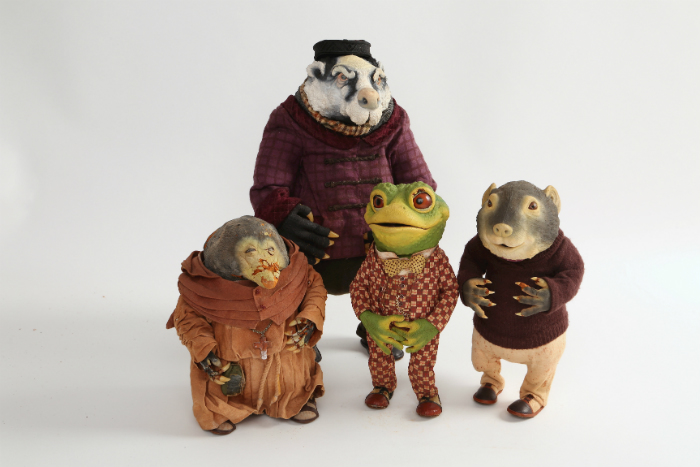 Waterside, Sale, has acquired 25 original Wind in the Willows puppets seen in the iconic Cosgrove Hall animated film made in Manchester.

The figures had been feared lost for more than 30 years but were recently discovered when they were put up for auction in Dorchester in April.

Now, Waterside has reunited the figures with other characters from the Cosgrove Hall archives including Dangermouse and Count Duckula.

The hand-made puppets range in height from 5 inches to 14 inches, Badger being the tallest.  Made from cast resin with metal joined skeletons, the figures belonged to Andrew Dunning, an animatronics and set designer.  The characters were used in the beloved 1983 film The Wind In The Willows, for which they were made and the TV show which ran on ITV from 1984 to 1988.

The figures have now come back in to the Cosgrove Hall fold after being kept safely in storage at Andrew’s work and then home before he decided to take them to Duke’s Auctioneers.

Once the story broke of the pieces going to auction, Waterside became alerted to their existence and with the generosity of Andrew Dunning and Lee Young, the MD at Duke’s Auctioneers, they were gifted to Waterside for posterity and its archives.

The news comes as Waterside reveals that it has received funding from the Arts Council England to make new animated films in response to the Cosgrove Hall Film Archive.

Chorlton-cum-Hardy based Cosgrove Hall was founded by Brian Cosgrove and Mark Hall in 1976, quickly becoming the UK’s largest animation house.  Cosgrove Hall produced popular animations including Noddy, Postman Pat and Animal Shelf before closing in 2009.  The studio also brought characters from Roald Dahl’s The BFG, Kenneth Graham’s The Wind in the Willows and Terry Prachett’s Truckers to life.

The puppets will be shown and shared at Waterside’s AniMates gathering on Monday 8 July.  They will then go on wide display at Waterside as part of new family exhibition Cosgrove Hall: Frame By Frame, running from 14 November until 28 December 2019.