Previewed: Polly and the Billets Doux at Eagle Inn 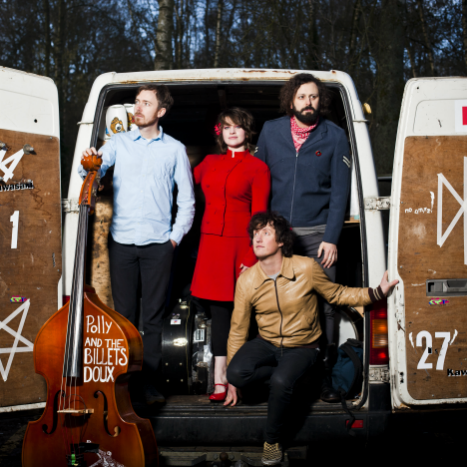 Genre defying Polly and the Billets Doux are set to perform at Eagle Inn in Salford on Thursday 28 May as their 15-date UK tour gets into full swing.

The four-piece are touring in support of their new single Tourniquet (released through Genepool Records), which marks the start of the next chapter for the four-piece who released their second album Money Tree to great praise in 2014.

With a loyal fanbase, which continues to grow, and a third album on the horizon, Polly and the Billets Doux have come a long way since they began life in the the backroom of a smoky Winchester environment, performing totally unamplified.  Their blend of blues, country, folk, soul, gospel and Americana has captivated audiences and lead to energy-filled performances at the likes of Glastonbury, the Big Chill, The Secret Garden Party, Green Man, Hop Farm, Wychwood and Cambridge Folk.  And just to throw a little more into the mix that is their style, one which it is a struggle to exactly pin down to a genre, they have hinted that their new album will be heavier in style and more experimental.

Championed by the likes of Bob Harris and Terry Wogan as well as Tom Robinson, Polly and the Billets Doux have certainly been impressing audiences and critics alike, and are set to continue wowing fans with their live shows and catching newcomers off-guard, before snaring them.

Polly and the Billets Doux perform at Eagle Inn on Thursday 28 May.

In Interview: Country album of the year winners Ward Thomas
In Interview: Baskery
In Review: The Orielles at The Deaf Institute