Previewed: Emin at Band On The Wall 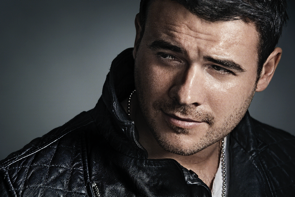 Having already visited Madrid, Berlin and Paris on on his huge world tour, which will also see him take in Miami and New York, Azerbaijani singer-songwriter Emin is set to perform in Manchester for the first time in support of his new album More Amor.

The tour comes after a stunning 18 months for the internationally acclaimed artist who has played some of the biggest events of his career recently, including a global broadcast at the Sochi Winter Olympics, a guest performance at Eurovision and a high profile spot at the broadcast of Miss Universe from Moscow.  These performances have seen him playing before a global audience of almost a billion viewers across 160 counties.

Emin arrives in Manchester with his latest album, More Amor, only a few weeks old.  More Amor is his fourth English language album and is forged from a diverse collection of songs which channels sounds akin to early Paul McCartney through to Maroon 5, with passion and contemplation, showcasing his husky vocal delivery.

More Amor has seen Emin co-writing with some of the finest in the music business, from Charly Williams (who co-wrote first single from the album, Woman) to Rob Davis, who penned Kylie’s Can’t Get You Out Of My Head and Jamie Scott through to Wayne Hector, hit maker for the likes of Britney, Olly Murs and The Pussycat Dolls.  And it’s the latest in a series of high quality, internationally celebrated albums which have seen Emin previously named Album of the Week as well as scooping two Single of the Week slots with BBC Radio 2.

With his past successes and an incredibly high profile 2015 already ahead of him, Emin is creating a long lasting musical legacy.  Through creativity, constant hard work and consistent high levels of exposure, Emin’s name has become synonymous with quality musical output and More Amor is another outstanding piece of that legacy.

In Review: Sol3 Mio at the Lowry
In Review: Jules Rendell, Kristyna Myles and Ione-Mai at The Anchor
In Interview: The Shires