In Review: Sol3 Mio at the Lowry Theatre 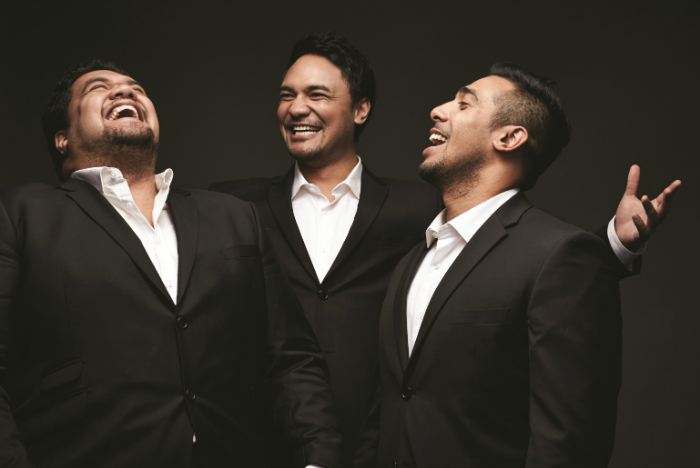 Offering a money back guarantee for a production is a brave move.  But for Sol3 Mio it’s a pretty safe bet that there won’t be any claims on it.

The trio, tenor brothers Pene and Amitai Pati and their baritone cousin Moses Mackey, have quickly established themselves, becoming 2014’s highest selling debut opera act and seeing their album go five times platinum in their native New Zealand.  And from the outset of the show at the Lowry Theatre it is immediately obvious that they have the talent to back up their fast rise.

With a strong element of humour running through the performance, quick witted retorts, interactions with the audience and even the odd moment of slapstick, Sol3 Mio move comfortably between genres – operas, musicals and even popular, making the songs their own.  They seem just as at home performing Rossini’s La Danza as a trio as they do performing solo pieces such as a Lied by Strauss and duets as they do giving a stunning rendition of Bette Midler’s The Rose or a delivery of You’ll Never Walk Along (a brave choice considering they are within earshot of Manchester United’s Old Trafford Stadium).

Accompanied by a pianist for the majority of the first act, they demonstrate the more formal aspects of their repertoire with Puccini also featuring before the pianist makes way as the style starts to shift to the less formal.  They joke that this is forced upon them as they can only afford to pay the pianist for the first few songs – it’s one of the many jokes which have the audience laughing.

The second act is given over to a much more laid back approach.  The trio rotate between instruments as the ukulele, guitar, double bass and conga drums all feature as well as the piano, on which they each take turns in performing.  Their ability behind the instruments matches their vocal talents as they merrily and enthusiastically work through a more contemporary and varied repertoire including Santa Lucia, Yellowbird, Blue Bayou and We Are Samoa.

But the highlight of the second half (musically at least) is a sensational rendition of Nessun Dorma by the two tenors, Pene and Amitai Pati.  It’s a spine-tingling performance which stays ringing in the ears for hours after the show has ended.

The audience laps up the show.  And the comedic elements are an absolute treat.  From the opening moments of the show, with Pene Pati ushering his fellow performers out of the way for his grand entrance, the humour is evident.  Jokes and wit permeate their performance, whether it is loving banter, one-liners, stealing each other’s song lines, joking with the audience or even a brief glimpse of the Haka dance.

But what strikes you most is the togetherness of the trio.  Naturally close knit, being two brothers and their cousin, their impromptu moments show a clear understanding has developed as they quickly pick up on what each is doing whilst ad-libbing and interactions with the audience.  It’s obvious that they relish every moment of being on stage together.

Watching Sol3 Mio you really do get the impression that they could quite happily remain on stage for hours after the curfew and that the audience would stay right there with them.  This is laid-back opera at its finest.