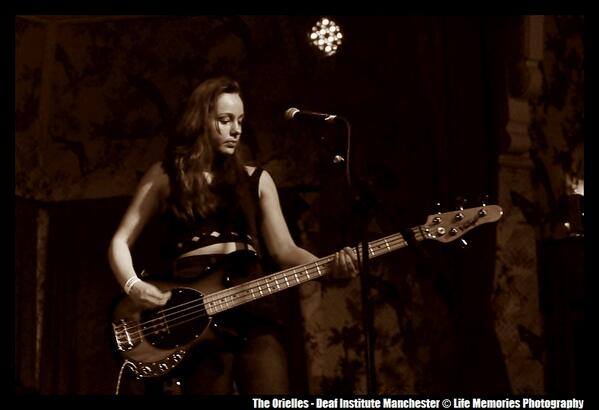 We headed down to the Deaf Institute to catch the hottest thing to come out of Halifax in quite some time, The Orielles, launching their single Entity, a stunning piece of surf-rock/pop – strong bass, beautiful, dreamy vocals, driving guitar and drums.

There’s quite a buzz developing about the Orielles, and we went in with high expectations. We certainly loved the stuff we had previously heard and were keen to hear it performed live. We were not let down!

Before the gig, we caught up with the three band members, sisters Sid (drums) and Esme (vocals and bass) and guitarist Henry.

Tell us a bit about your background
Sid: We’ve been together for about two years now. We first met at a house party, where there was a piano upstairs and we started jamming together. We decided to meet up for some more practices and it developed from there. We’ve been together since then and did our first gig about a year and a half ago with the Lovely Eggs in our hometown and since then have been doing more and more gigs.

How do you find performing gigs?
Henry: At first we got a little nervous but since Damian Morgan took over as our manager we’ve been getting more and better gigs and have been getting excited about it.

Is this your first gig in Manchester?
Sid: We’ve played a few times. We played at Soundcontrol around a year ago.

You were down in London as well for a few gigs last week. How were they?
Esme: Yeah, we have a couple of gigs supporting the Primitives at Lexington and last week we played at Borderline.

How did they go?
Esme: Really good.
Sid: Yeah, they were really good.
Henry: We got a lot of good feedback on twitter after the Primitives gigs.
Esme: They were all sold out as well and it was a decent crowd.

In terms of the songwriting process, how does that work?
Esme: We all write together. There are no songs which one person has written more than another. We find it really easy to write the songs together.

Sid and Esme, with the two of you being sisters is there any sibling rivalry there?
Esme: No, I don’t think so

Henry, do you find that they gang up on you at all?
Henry: (laughs), it has happened before and we’ve had a few debates but nothing serious.
Esme: With there being three of us, there’s always two people ganging up on one!

Tonight’s the launch for your single Entity, tell us a bit about the single
Sid: It’s loosely based upon not one person in particular, but when you miss somebody who is not there anymore. It’s kind of based upon missing them when they are still in your mind but not really there anymore. The video was filmed on Blackpool pier.

Esme: We’ve got a lot of new tracks. We’re not sure when we are going to release or record them, but hopefully by the end of the Summer we’re going to be releasing more stuff. 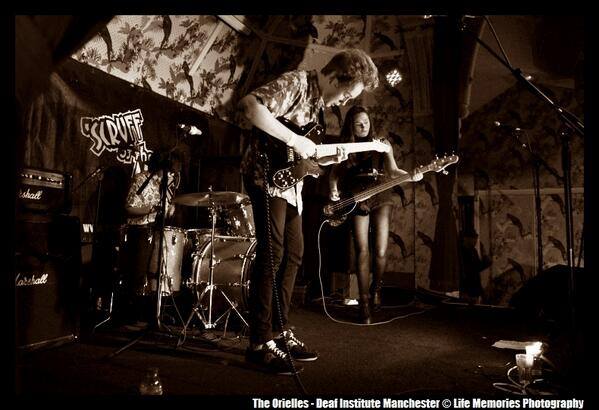 Henry Wade of The Orielles performing at The Deaf Institute

When gig time came, they were on form and the crowd reacted likewise.  Playing before a packed Deaf Institute, The Orielles showed why expectations of them are becoming so high, why there’s a buzz about them and why you should add them to your playlist and catch them live.  The Orielles are clearly very talented and fit together as a unit perfectly.

Their performance was full of energy – so much in fact that it will be a medical miracle if guitarist Henry Wade did not wake up the next morning with whiplash!  He was clearly in his element, loving every moment of being on stage. 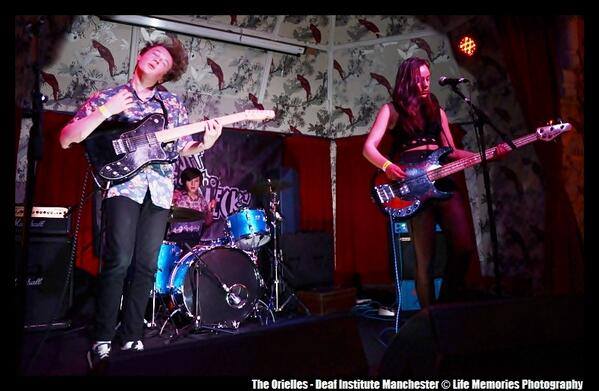 The Orielles performing at The Deaf Institute April 2014

The surf-pop sound shone through, although a slightly heavier and darker sound could be found in tracks such as the divine Sugar Tastes Like Salt.  The night was about their stunning single Entity, however, and that too was performed incredibly, causing us to head immediately to the merchandise stand, where we were gladly relieved of our money in exchange for the CD (yes, we’re old school like that – we like CDs that we can physically hold!)

The Orielles certainly left us knowing that there should be a bright future ahead for them. We’ll  be keeping an eye on them and catching them live again.

The Orielles single Entity can be found on Amazon.