Manchester Museum Launches ‘From The War of Nature’ Exhibition 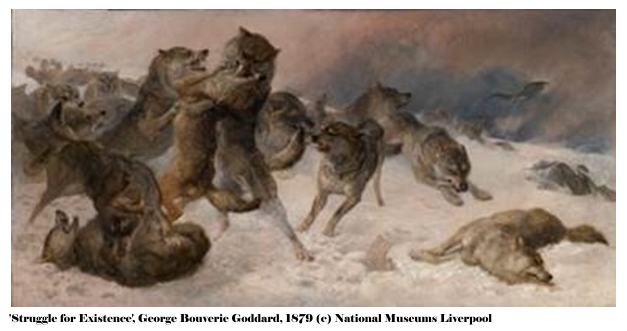 In commemoration of the start of World War I, Manchester Museum is hosting a new exhibition exploring the struggle for existence in the Natural World.

We accepted the invitation to join the launch evening and private viewing and were impressed with an exhibition which explores the fine balance between species, their natural survival instincts and the sneaky tactics which some species employ to boost their chances of survival.

From the War of Nature opens on 11th April 2014 and takes its inspiration from the 1914 centenary (the concept of war and conflict) and draws upon recent scientific discovery, to create an exhibition based on the relationships between living things, the conflicts and challenges faced in the natural world and their resolutions.

As the opening speech confirmed, the title for the exhibition was derived from Charles Darwin’s On the Origin of Species, which eminently detailed how the evolution of plants and animals developed by means of natural selection. i.e. survival of the fittest. The ‘war’ of nature.

The exhibition is designed to illustrate that war, is in fact not an inevitable outcome of conflict and that despite all species of living things on earth having to fight to keep their place in the evolutionary chain, they also find ways of co-existing, co-operating and collaborating, sometimes by means of co-dependency and hence avoidance of conflict is possible. In a similar way, this is much like the day-to-day battles faced by us, as humans, in both our own personal lives and social spaces as well as on a global scale.

We are also faced with questions about how we, as humans, co-exist with the nature that surrounds us. There are many species on earth that face extinction, often due to environmental changes and destruction that we are causing in our own continued march of supremacy over the planet – is there any hope of reversing the damage that we are doing?

The answer, thankfully, is yes. However, it means that we all need to make some space for nature in our lives. We need to conserve precious resources and help to protect the plant and animal life around us so that the diverse nature of life on our planet can be sustained – in spite of the struggles and conflicts faced by us all.

Henry McGhie, Head of Collections and curator of Zoology said:
‘The old view of nature red in tooth and claw is no more ‘real’ than a view of a peaceful nature, or of many other kinds of relationships. Individual plants and animals live in conflict with one another, where they want different things. But more often than not they divide resources up, or avoid actual aggression. The common usage of the word ‘conflict’ loses those subtleties, but it is surely reassuring to think that people, with great capacity for empathy and collaboration, are not consigned to behave in any particular way, or to justify that by saying it is somehow ‘natural’.

Dr Nick Merriman, Director of Manchester Museum said:
‘The exhibition reminds us that humans, through their exploitation of land and animals, are the cause of some of the conflict that we see in the natural world. It is our responsibility, therefore to support conservation efforts, and to consider the impact we have when we use natural resources.’

The exhibition shows new taxidermy specimens displaying animal behaviours including: a wolf, boxing hares, starlings being chased by a sparrow hawk and a mole and blackbird fighting over a worm.

From the War of Nature (#WarofNature) will run from 11 April 2014 to 7 September 2014 in the Museum’s temporary exhibitions gallery.