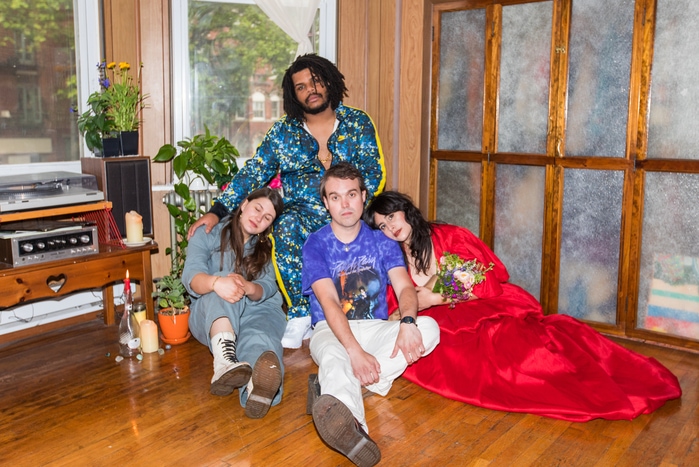 After releasing their third full -length album, Mannequin Pussy come to Manchester’s Soup Kitchen in the midst of a run of European tour dates.  The foursome are performing seven UK shows including Soup Kitchen on 13 November.

Patience, which marks Mannequin Pussy’s first release through Epitaph, is an album which looks at the physical experience of the body, with songs tracking the movements of mouths and hands and racing hearts, skin and spit and teeth and blood.

The Philadelphia-based band released the album in June, marking the follow up to 2016’s release Romantic, an album which won huge critical acclaim.  Mannequin Pussy worked with producer/engineer Will Yip (Quicksand, The Menzingers), shaping an explosive sound that never overshadows the subtlety of their songwriting. “In the past there’s been a chaotic feeling to the recording process, but working with Will put us in a different headspace,” says Marisa Dabice (guitar and vocals). “It helped us show our progression over the past few years and make a very crisp-sounding record, without losing the dirtiness of what Mannequin Pussy really is.”

Speaking about the album Dabice explained, “I always want our records to end in a place of optimism,” says Dabice. “The songs take you on a journey through all these very toxic emotions and traumatic experiences, but what I’m trying to articulate is that something good can come from getting through all that.”

Mannequin Pussy formed as a duo when childhood friends Dabice and Athanasios Paul (guitar, keys) reconnected after years apart. At the time, Dabice had recently returned to the East Coast from Colorado in order to help take care of her mother, who’d just suffered a stroke. “It was one of the most trying times of my life, and at some point my mom suggested that I try going to therapy,” Dabice recalls. “But instead I was like, ‘I think I’m just gonna learn to play guitar.’ I didn’t want to talk to anyone; I just wanted to lose myself in the creative process.” Once she and Paul played music together, they discovered a chemistry she now describes as magical. “We created so much in such a short period of time,” Dabice says. “We never even thought of making records or anything—it was just this pure emotional outlet, just us screaming onstage with our guitars.”

As they continued collaborating, Dabice and Paul later added Kaleen Reading (drums, percussion) and Colins Rey Regisford Regisford (bass, samples, vocals)to the lineup, making their debut with GP in 2014 and releasing Romantic in fall 2016. Recently signed to Epitaph, Mannequin Pussy found themselves newly revitalized in the writing and recording of Patience, their creative connection stronger than ever. “I’m so proud of how hard we’ve worked to get to this point,” says Dabice. “This album sounds exactly how I’ve always wanted us to sound—I’ve never listened to something we’ve made and felt so inspired by it.”

When do Mannequin Pussy headline at Manchester’s Soup Kitchen?