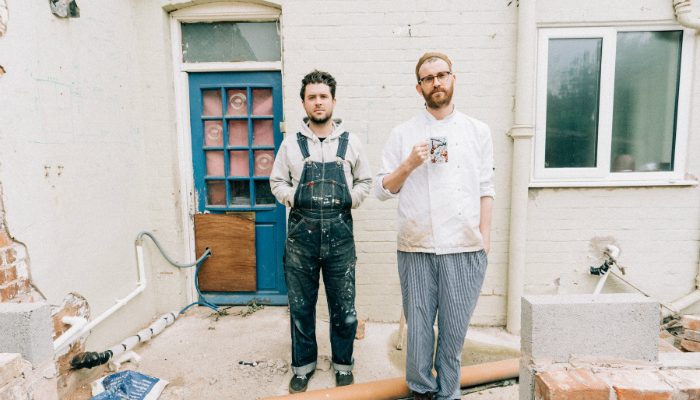 Crystal Palace duo JOHN comes to Manchester in October as they release their latest album Out Here On The Fringes.

Out Here On The Fringes is due for release on 4 October, the day they play Manchester on their UK tour.  The album follows their 2017 debut God Speed In The National Limit and a European tour with Idles.

The album again embraces their stripped back approach, filled with idiosyncrasies.  They also welcome a number of guests providing additional instrumentation alongside the angular guitar and drum lines which have become synonymous with them.

Lead track/single Future Thinker – A recent winner on Steve Lamacq’s BBC 6music Roundtable – features Chloe Herington (Saxophonist for Knifeworld/Chromehoof). Her appearance signalling an intent to push beyond more repetitive traditions expected of the genre. This is no less apparent on track Dog Walker, with minimal violins (provided by artist Rosanna Dean) cutting across the thunderous rumble of percussion.

The album’s title and artwork, which was produced by vocalist/drummer John Newton, provides the context for the album.  It nods to an experience of life on the edge of the city.  It looks at the dilemma of sustainability, consumerism (the excellently titled Midnight Supermarket written by guitarist Johnny Healey) and escapism, whilst also taking a joyous turn inspire of the implied anxiety of the perceived future.

When do JOHN perform at Manchester’s The Castle?