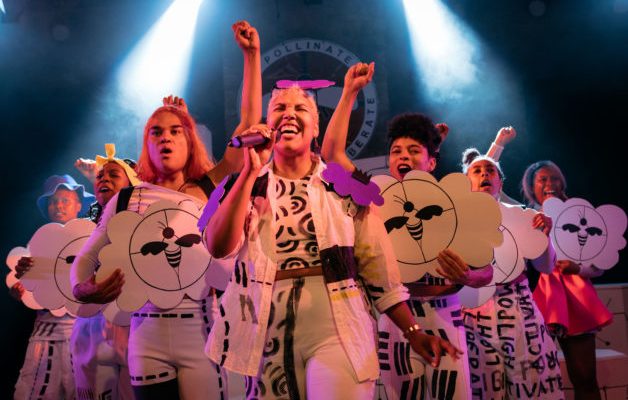 Hive City Legacy, a collaboration between The Roundhouse and Australian production company Quiet Riot opens next week at HOME Manchester.

The political work of art features eight extraordinary femmes who challenge, uplift and celebrate, as they tackle issues across race, sexuality and mental health in an unapologetic and genry defying performance.

Hive City Legacy is the result of a joint venture between Busty Beatz and Lisa Fa’alafi of the smash hit Hot Brown Honey, movement director and choreographer Yami ‘Rowdy’ Lofvenberg, and London’s The Roundhouse.  The group teamed up to scour London to bring together an extraordinary league of femmes of colour.

They received more than 250 applications for the paid opportunity from young artists aged 18-25.  Skills ranged from circus, beat-boxing, spoken word, and cabaret to dance as well as everything in between.

The resultant Hive City Legacy burst on to The Roundhouse stage and enjoyed a sell-out two-week run in 2018.  Following the success of Hive City Legacy, the production then went on tour, enjoying a return season this year.

Australian collective Hot Brown Honey are in the midst of a world pollination tour, smashing stereotypes in Canada, North American and at home in Australia.  Busty Beatz of Hot Brown Honey is Musical Director and Queen Bee, and Lisa Fa’alafi is director, designer, choreographer and performer.

Speaking about the production, Lisa Fa’alafi commented, “We are so excited for Hive City Legacy to perform at HOME.  We felt privileged to be a part of bringing these superhero Femmes stories to the stage – having the opportunity to tour ensures our work to decolonise one stage at a time continues.  It’s time to Activate, Pollinate and Liberate, and you are all invited to be a part of shifting the paradigm!”

When does Hive City Legacy come to HOME Manchester?