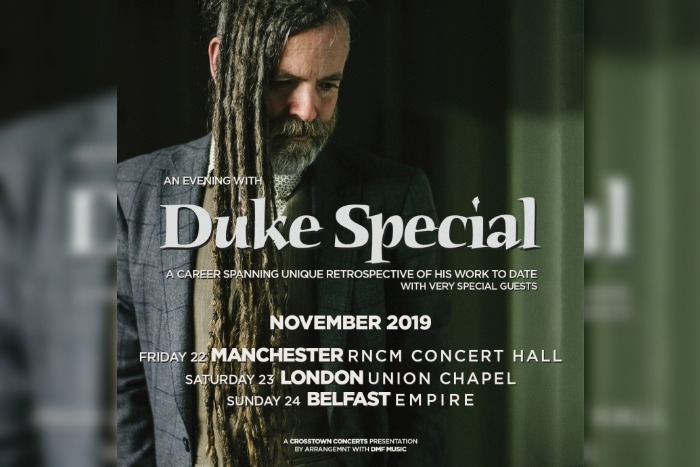 Duke Special will open a run of three UK dates at Manchester’s RNCM where he will perform a retrospective of his work to date.

The ‘Evening with Duke Special’ will see him dipping in to studio albums, songs from his theatre productions, Mother Courage, Gulliver’s Travels, Huckleberry Finn and Paperboy, and his most recent album Hallow.

The events will also include a series of special guests.

By nature Duke Special (aka Peter Wilson) is a curious person. He is curious about theatre, books, music, poetry, art, love, life, redemption, death, 78RPM records and most recently, gardening! All of this is evidenced by the variety of musical adventures throughout his career. As well as releasing records and touring the world, his creative talents have seen him involved in a diverse array of projects. These include writing the music for and appearing in Deborah Warner’s critically acclaimed 2009 production of ‘Mother Courage and Her Children’ at London’s National Theatre, presenting a documentary on the life of ’50s megastar Ruby Murray and being commissioned by the Metropolitan Museum of Art in New York to write a series of original songs based on photographs for their exhibition of the photographers Stieglitz, Steichen, and Strand.

Recently he has also delved in to the world of musical theatre alongside stand-up comedian Andrew Doyle, bringing a new adaptation of Gulliver’s Travels to the Lyric Theatre in Belfast, and a collaboration on Paperboy, a heart-warming musical drama based on the memoirs of Tony Macaulay.

When does Duke Special perform at Manchester’s RNCM?

Duke Special performs at the Royal Northern College of Manchester on 22 November 2019.