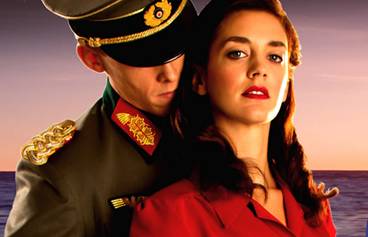 Having premiered the original production in Guernsey in 2008 to great critical acclaim, the passionate wartime thriller, Lotty’s War, is coming to the Opera House this October.

Based on true events, from recently discovered diaries, Lotty’s War is set in 1940 during the early part of World War II, during the occupation of the Channel Islands – the only piece of Britain captured by the Nazis.

On the 28th June of that year, the main harbour of Guernsey was raided by a squadron of German Bombers. Forty four islanders, including Lotty’s dad, were killed in the attack and with the last boat to England gone, Lotty is left sharing close quarters with her sworn enemy, in particular General Bernberg.

In order to save a friend and her island, Lotty ventures down a passionate and dangerous path, torn between her loyalty to her homeland and the temptations of forbidden love.

Written by island born Giuliano Crispini and directed by Bruce Guthrie, Lotty’s War is produced in association with Guildford Yvonne Arnaud Theatre and Lotty’s War Ltd and made possible by the financial support of the Guernsey Arts Commission, who supported the original production.

“What a treat for theater goers…a brilliant production!” Guernsey Press

The Full Monty Coomes to The Opera House

Madama Butterfly and La Triviata Set for the Opera House