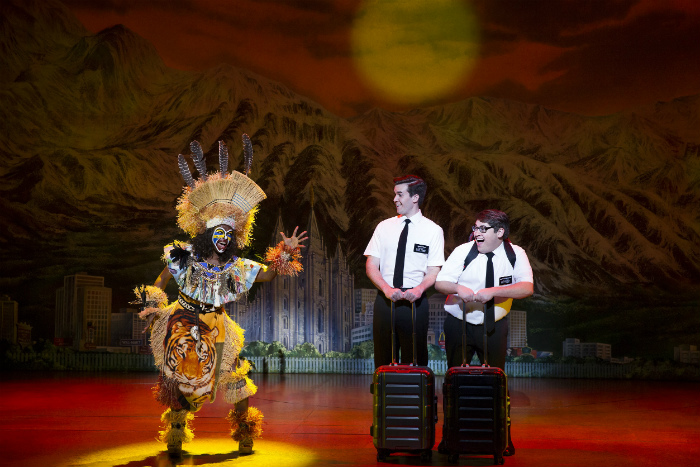 Manchester’s Palace Theatre will host an additional preview for the upcoming Manchester season of The Book of Mormon.  The show will be the first chance for fans to see the much-anticipated Broadway smash hit at the venue.

Producers are offering 1500 tickets for the first Manchester preview at only £15, with tickets going on sale on Thursday.

Tickets for this preview performance are only available in person via the Palace Theatre Box Office which will open at 10am on Thursday 30 May 2019. Up to two tickets may be purchased per customer on a strictly ‘first come-first served’ basis with coffee available at the Palace Theatre for those who get there early. Valid ID must be shown during the transaction (this ID will be used for identification on the day of the performance). All tickets are subject to availability and cannot be re-sold.

And there will also be a ticket lottery from 6 June!  15 tickets will be sold at £15 by ballot before each performance at Manchester’s Palace Theatre.  Entries will only be accepted in person, at the Box Office beginning two and a half hours prior to each performance. Two hours before curtain, names will be drawn at random for a limited number of tickets priced at £15 each.

The Tony, Olivier and Grammy Award winning The Book of Mormon has extended its run at the Palace Theatre, Manchester, until Saturday 10 August.

The cast of The Book of Mormon in Manchester will be led by Kevin Clay as Elder Price and Conner Peirson as Elder Cunningham, recreating their roles from the Broadway and US touring productions. They are joined by Nicole-Lily Baisden as Nabulungi, Will Hawksworth as Elder McKinley, Ewen Cummins as Mafala Hatimbi, Johnathan Tweedie as Joseph Smith and Thomas Vernal as the General.

When does The Book of Mormon run at Manchester’s Palace Theatre?

The Book of Mormon runs at the Palace Theatre Manchester from 6 June until 10 August 2019.