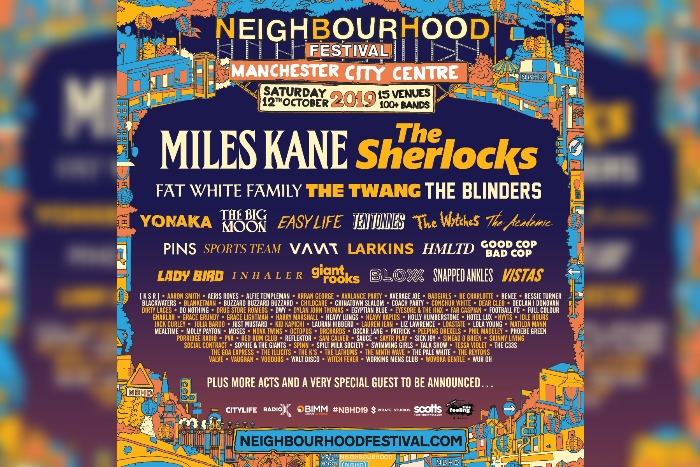 Neighbourhood Festival is back on Saturday with another great lineup featuring more than 100 acts at 15 venues across Manchester city centre.

With so many bands, artists and duos set to perform, we’ve picked out ten of our top acts, spaced across the day.  For us, it’s a question of some old favourites and discovering some new artists at Neighbourhood 2019.

So, here’s what we have planned for Neighbourhood Festival 2019:

We’re getting an early start in, catching The Magic Gang at Gorilla.  One of the final acts to be announced for the Manchester multi-venue event, The Magic Gang played the Neighbourhood launch party.  They are performing them ahead of their second album so hopefully they’ll be showing off some of their new material.

25 minutes to walk from Gorilla to the Deaf Institute.  Easy.  That’s the beauty of Neighbourhood – loads of venues but all within a pretty decent distance from each other.  Ahead of their first headline show on 16 November at YES, LOAstate will be at the Deaf Institute.

A short break between bands and a chance to grab one of Deaf Institute’s awesome burgers before Nova Twins take to the stage.  After the huge energy of their latest single Vortex, we can’t wait to catch them live for what will surely be a full on performance.  Nova Twins will head out on tour in February 2020, including a gig at Jimmys.

Just weeks after releasing her new EP Everything Is Dogs (we’re more cat people, but ok we can’t resist a good doggo), Lauran Hibberd hits the stage at Night People.  There’s been quite a buzz about the Isle of Wight alt-popper, so go find out why!

This will be our first time catching Scottish Alternative Music Award winner Be Charlotte, who brings influences from the likes of Bob Dylan and Tracy Chapman, blending them with a pop and hip-hop feel.  And that’s what we love about Neighbourhood – the incredible array of artists you can see for the first (or 10th time).

A slight pause for breathe and then, it’s Manchester band and BIMM success story Working Mens Club.  Their recent gig at YES showed why they’re being so hotly tipped as did recent single Teeth.

After catching them previously at Neighbourhood Festival, we know that they’re a tremendous act, so we’ve got them down as a definite in our schedule.  They’re at Neighbourhood ahead of the release of their second album Walking Like We Do in January, the follow up to their acclaimed Mercury Music Prize nominated debut Love In The 4th Dimension.

The first time we caught Sports Team was at a festival when we arrived early for the next act on due to a cancellation on another stage.  It was an absolute blessing.  Charismatic, energetic and full of fantastic songs – they are a must!

And now we have an issue …

We’re going to go with either

One that we haven’t managed to catch live before.  We’ve heard so many good things about them, from so many different sources that we’re sure we’ll be making a mistake if we don’t see them …

but on the other hand …

We were delighted to see Sophie and the Giants on the line up for Neighbourhood.  We last caught them at Jimmys a few months back, where they put on a great gig.  Spiky, energetic, powerful – cracking songs.  Where’s that cloning machine we’ve been working on?

In honesty it’s difficult to pick a schedule for the day.  We could just as easily have added in Mealtime, Julia Bardo, Holly Humberstone, Red Rum Club, Molly Payton, Miles Kane, PINS and Yonaka and countless others.  Whatever you see it’s difficult to imagine it being anything other than a great day.