Previewed: Playland at The Empty Space 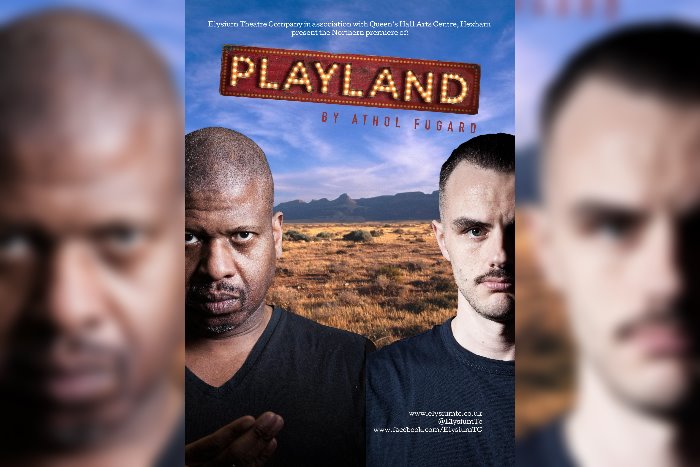 Playland runs from Thursday 24 until Saturday 26 October as part of Black History Month.  It is presented by Elysium, a theatre company founded by Jake Murray, Danny Solomon and actress/producer Hannah Ellis Ryan who aim to bring the best new plays and world theatre to the North.

Set on New Year’s Eve 1989, only a month or so prior to Nelson Mandela’s release from prison, the Cold War is over, the world is changing, and two men encounter one another in a remote corner of Playland – a run-down funfair somewhere in the vast wilderness known as the Karoo.  The two men – Gideon Le Roux a white ex-soldier fresh from the Border War in Namibia and who is suffering from PTSD and Martinus Zoeloe a black night-watchman who murdered his white boss a decade before for raping his wife – confront each other, both fleeing from the demons of their past. As night draws in, neither can escape from what they have done, and must work out their own redemption as they beat against the limits of forgiveness.

Playland features Danny Solomon as Gideon and Faz Singhateh as Martinus.  The two actors previously performed together in Elysium’s Jesus Hopped The A Train at HOME Manchester.

Speaking about the production, Director Jake Murray commented, “In our modern era in which racial and religious divisions are re-asserting themselves all across the world in our political lives, Playland could not be more relevant or timely and I am very excited to bring this play to the North West and East for the first time. Playland is both a beautiful and moving play that resonates far beyond its immediate context to become about pain and reconciliation, guilt and repentance, the possibility of understanding across racial and political divides and the limitations of forgiveness. Reminding us of how it was when those divisions were at their most vicious, and the damage they caused when imposed across society.”

When does Playland run at The Empty Space @ Footlights House?

Playland runs at The Empty Space @ Footlights House at Media City Thursday 24 to Saturday 26 October 2019.  Showings at 7.30pm.  Tickets £10.50/£8.50 via Ticketsource.  There will be a special Q&A with the cast and creatives after the show on Friday 25 October.