In Review: Walk The Moon at the Ritz Manchester 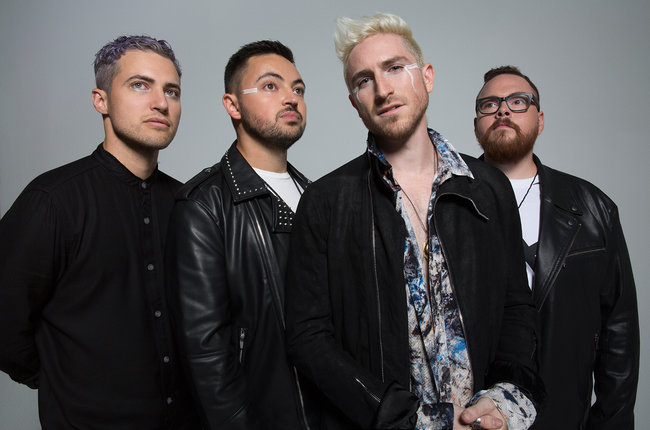 Walk The Moon were catapulted to stardom back in 2015 when their massive single Shut Up and Dance became the song of the summer.  You simply couldn’t avoid it.  And why would you want to?  Catchy, anthemic, feet started tapping as soon as the first guitar string was plucked.  The single helped Walk The Moon on the way to picking up a slew of honours and nominations with two Billboard Music Awards, MTV Music Video Award nominations, AMA nominations.  The song went on to garner more than six million downloads and 850 million streams, breaking records for consecutive weeks at the number one spot on Billboard’s Hot Rock Songs chart at the time.

And now the group, Nicholas Petricca (singer/keyboardist), Kevin Ray (bassist), Eli Maiman (guitarist), and Sean Waugaman (drummer) are back with their latest studio album What If Nothing, hitting the UK for an eight date tour, opening last night at Manchester’s O2 Ritz.

Taking to an atmospheric stage (whilst it’s quite minimalist, lighting and smoke effects are used well to create an often mysterious and moody feel), they open with a heavily synth and percussion based duo of tracks Press Restart and Portugal.  They are immediately on to a winner with the crowd.  It’s full of impact and vigour, setting a decidedly upbeat tempo for the set.

It’s immediately apparent that frontman Nicholas Petricca is in his element.  He’s full of energy, strutting around on the stage and interacting with fans from the outset, gesturing towards outreached cameras, posing to the delight of the group on the front row.

There’s plenty of contrast to Walk The Moon’s set.  Amongst the dynamic tracks in the set, they blend in a delicate, stunning, acoustic version of Aquaman and the slower Different Colors as they change the pace up and down to good effect.  And helping to build the contrast, are plenty of instrument changes – drums, synth pads, keyboards and guitars are quickly ushered on and off stage between songs, making for an interesting evolving set.

Unsurprisingly it’s Shut Up And Dance which has the crowd lit.  They’re bouncing up and down, singing away, and on stage, Walk The Moon are loving it. Similarly One Foot has the renowned O2 Ritz bouncy floor springing into action as fans jump and dance around.

There’s a nice retro vibe running throughout the set and that extends through to a performance of Headphones featuring cuts of Led Zeppelin’s Kashmir.

Overall, there’s a good balance between tracks from their latest album What If Nothing and some of their previous material – something which they admit they were keen to achieve.  Certainly fans of the band will have left the O2 Ritz Manchester happy with what they saw (and so will plenty of the mums and dads at the back of the venue who were dancing away – Yes, we saw you all!)