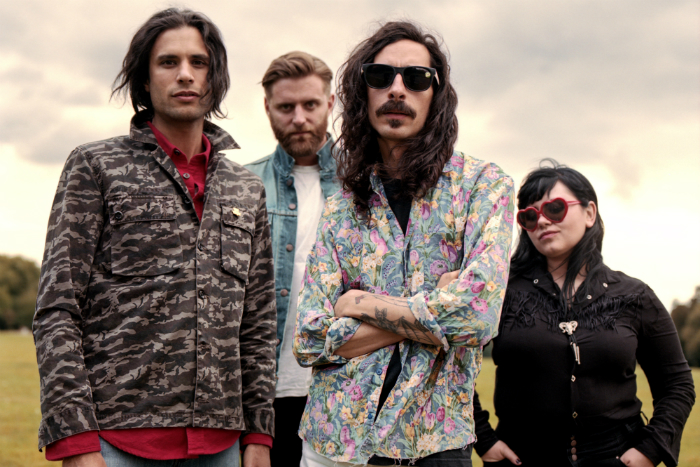 Turbowolf are set to play at Manchester Academy, as they open their UK tour on the day their latest album The Free Life is released.

The Manchester gig marks a return to the city for the group.  Turbowolf have previously headlined at the likes of the Deaf Institute.

The Alt-rock group have teamed up with Mike Kerr of Royal Blood, to produce the second single Domino from the upcoming album.

The Free Life, which is due for release on 9 March 2018, harnesses the insanity crackling through the air right now, distilling it into a set of songs that veer gloriously between the anthemic and the gritty, the psychedelic and the pop, the unhinged and the profound.

Guitarist Andy Ghosh says of the varied collaborations on the album: “These people are our friends, which means it’s fun…and texturally, it’s interesting. It adds extra dimension.”

Latest single Domino, with its exploding chorus, takes you on a breakneck sonic journey of driving bass lines, immersive overdrive and cutting synthesisers, racing through pounding verses on a transportative, transcendental voyage that is the anarchic punk ethos of Turbowolf.

Speaking about the collaboration, Mike Kerr commented, “I’ve been a fan of ‘The Wolf’ right from the beginning. Over the years we have become great friends but to get to sing on one their songs is a dream for me. ‘Domino’ is everything I want from Turbowolf as a fan, some of the best riffs money can’t buy and so catchy that you feel like both of your ears are reminiscing with a dear old friend. Rock and roll’s very own paramedics have done it again.”

Turbowolf have also been announced for Royal Blood’s upcoming US tour and have also announced their own UK and European tour dates for 2018.

Where and when do Turbowolf perform in Manchester?

When do tickets for Turbowolf’s Manchester gig at Manchester Academy 3 go on sale?

Tickets for Turbowolf’s Manchester gig at Academy 3 are on sale now.