In Review: Turbowolf at The Deaf Institute 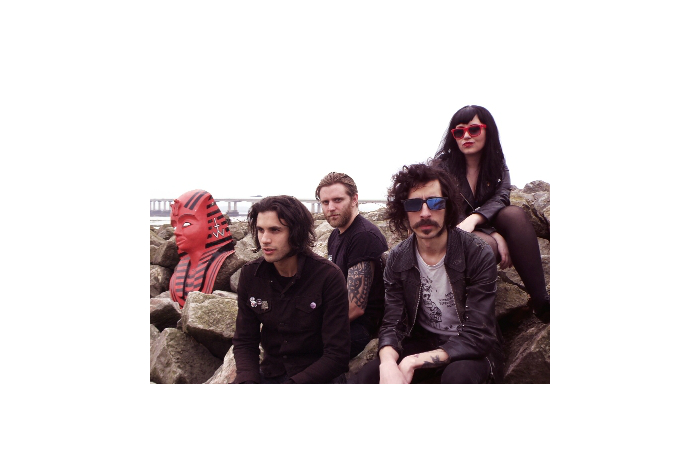 “We’re all friends in here” declared Turbowolf’s enigmatic frontman Chris Georgiadis.  The atmosphere certainly justified his comment.  The Deaf Institute was packed out, with an energetic feel, one of excitement, friendliness and anticipation before Turbowolf made their way on to the stage.

Chris Georgiadis does not look like your typical frontman.  Sporting a moustache which almost literally screams “Look at me, I’m a moustache”, coupled with an often quizzical look, it’s almost a surprise that he really can command the stage completely.

And beneath the slightly left of centre exterior is a great band.  Behind Georgiadis is a great set of musicians – Andy Ghosh on guitars, a riffmaster extraordinaire, whilst Lianna Lee Davies on bass and Blake Davies on drums lay the platform with a driving bass line and rhythm … tight, thunderous and infectious.

Playing material from their eponymous debut album and their forthcoming follow-up, Two Hands due out in April, Turbowolf performed a top notch gig for the eager fans.   Tracks Solid Gold from their debut and current single Rabbit’s Foot particularly standing out amongst what was, in reality, one quality song after another for the whole of the set.

Georgiadis called for the fans to dance and jump around – they responded by creating a huge moshpit, with barely a soul being able to resist the urge to move.

This was a gig which rightfully saw Turbowolf receiving the cheers of an adoring crowd, song after song.  In fact the only jeers were saved for the brave fan who jokingly shouted ‘Shave off your tash’ – Georgiadis responding, in good humour, ‘that’s a dangerous thing to say in here’.

In another world Chris Georgiadis could have been the leader of a cult.  The charismatic frontman has an uncanny ability to control the crowd, whether whipping them into a frenzy or bringing them to a calm state, he is full of life and it seems pretty much impossible not to be drawn in.  Thankfully, in this world he’s in Turbowolf a band which seem to have it all – and on this night certainly had a venue full of very happy fans.

In Review: The Courtesans at The Ruby Lounge
In Review: Marmozets and Lonely The Brave at The Deaf Institute
Foo Fighters Announce Manchester Tour Date