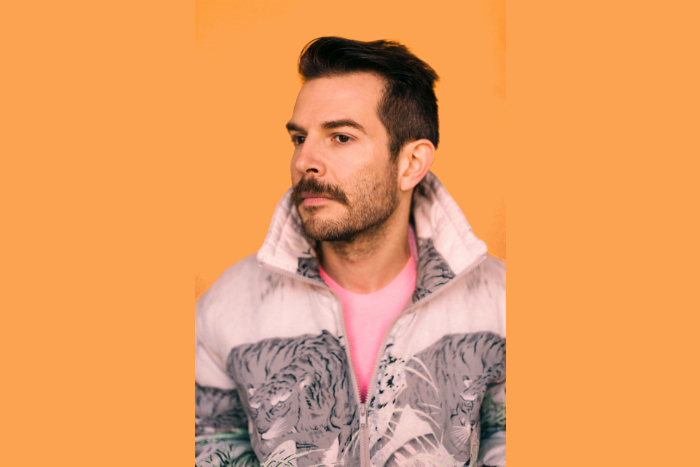 Outside Manchester’s Deaf Institute the rain is lashing down, thunder is rumbling through the air and lightning is piercing the dark skies.  It’s the sort of night you stay home, get the cats in and put the TV on.  But that will soon all be forgotten about.

Independent artist Bright Light Bright Light (aka Rod Thomas) has made his way from Wales, through London and to New York, where he is now largely based.  With three albums, including his 2016 LP Choreography, and several EPs now firmly under his belt, Bright Light Bright Light has quite the range of material to choose from.  Performing at Manchester’s Deaf Institute, he goes firmly upbeat.  The predominantly up-tempo, dramatic, electronic-pop set list is designed to get the crowd dancing – and it succeeds.

From the moment he steps on stage in a rainbow coloured suit, he is energetic, funny, charismatic and clearly in his element.  The likes of All In The Name and Symmetry of Two Hearts set the tone perfectly for the night – they are vibrant, dynamic, highly catchy but despite this they are far from samely, they have distinctive feels to them.

There’s a strong 80’s aura to the evening, in fact Bright Light Bright Light freely admits to being “very firmly stuck” in that decade and thanks the audience for indulging his fondness of that time’s musical style.  Synth, saxophone, drama all combine to good effect during his set.  In fact, he’s made such a good job of putting these songs together, that the effect is what sounds like it could easily be the soundtrack to an ‘80’s movie.

Bright Light Bright Light does have a flare for the dramatic – he tells the tale of the inspiration behind Running Back To You, painting the most vivid of pictures in a hilarious description of a diva running through a storm to win back her man.  And the music follows a similar vein – full of drama, twists and turns.  Although the upbeat, up-tempo theme remains, songs frequently hint at something different, before moving direction.  The likes of Moves have a deliciously dark opening; others are tinged with sadness, but throughout Bright Light Bright Light (or Bright Light X2 as he is sometimes known) keeps the mood firmly buoyant and the crowd moving.

Bright Light Bright Light explains that the songs on Choreography were based on his interpretation of scenes in movies and television shows.  He tells of the stories behind the dramatic Little Bit (inspired by Jean Gray in X-Men) to Kiss For Kiss (imagine Sigourney Weaver writhing around in a pit of aliens in Alien Resurrection); from Symmetry Of Two Hearts (picture Kim Catrall dancing around a shopping mall in Mannequin) to Feel It (inspired by Laura Palmer’s diary in Twin Peaks, albeit admittedly on his earlier album Make Me Believe in Hope).  Listening to him introduce tracks takes the show to another level – it’s not just about music, this is one for movie buffs too!

Throughout the evening he is full of wit, down to earth and clearly appreciative of the audience.  He talks of being inspired by the likes of Ru Paul, Queers As Folk, Kylie’s Light Years album, and a drunken neighbour who left the radio playing full volume for 24 hours.  There is also a poignant moment when he thanks Manchester for doing Britain proud over recent months, following the Manchester Arena bombing.

After pretending to leave the stage for an encore (he wryly acknowledges that it would hardly be a surprise if he closed the set and then returned to perform again as if nobody had ever been to a gig before!) he performs the beautiful slower Immature.  It stands in contrast to the rest of the evening as he performs the stunning track without the assistance of his band, taking over keyboard duties.  Fans stand to attention and erupt at the end of it before the band return to complete the encore set.

Bright Light Bright Light has a way of making you forget all about what’s going on outside and just enjoying the moment – the dark storm coming down outside could be a thousand miles away, in the Deaf Institute it’s shining brightly.