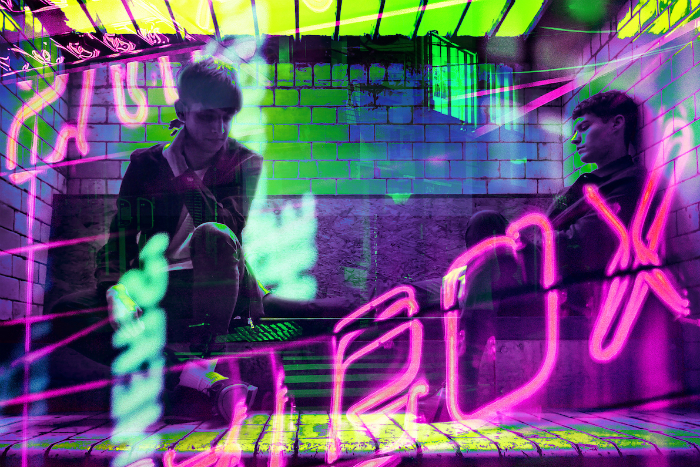 Manchester electro/alt-pop duo Tonica have revealed their debut song, the excellent slice of electro-pop Save Yourself (you can listen below).  Formed off the back of the fantastic pop focused group Girl Friend, Tonica are Amory (singer, songwriter) and Sam (songwriter, instrumentalist, and producer).

Tonica are keenly headed in an alternative electro-pop direction.  They are fuelled by a desire to offer indie-pop music with substance, moving away from all out pop.

Powered by brooding electro beats, vibrant synths and warped vocals, Save Yourself was written about a romantic interest in a troubled friend.  It explores themes of addiction and the plight of modern love, delving into the romantic and melodramatic.  The duo recorded Save Yourself at Tonica’s home studio before it was mastered by Chris Gehringer (Drake, The 1975).

Tonica draw inspiration from the likes of Banks, Honne and The XX.  They are particularly attracted to the neon-noir, employing the talents of graphic designer João Oliviera, for their artwork.

The neon-noir and melodrama is something they appear keen to inject into their live shows as well, utilising a bespoke lighting set up, consisting of several light panels and strobe lights that are triggered by the beat of the music.

Discussing the fascination with the ‘neon-noir’, Tonica commented, ‘The mood and aesthetic of 80s/modern neon-noir cinema has definitely inspired what we do. Films like Blade Runner & Drive have this shadowy, mysterious, sinister feeling to them – we feel like our music captures that sense of drama & suspense too. We love the use of neon glamour and rich colours mixed with industrial gloom within NN cinema, especially in film posters.’

Save Yourself by Tonica is due to be officially released on Friday.

Where can you find out more about Tonica?