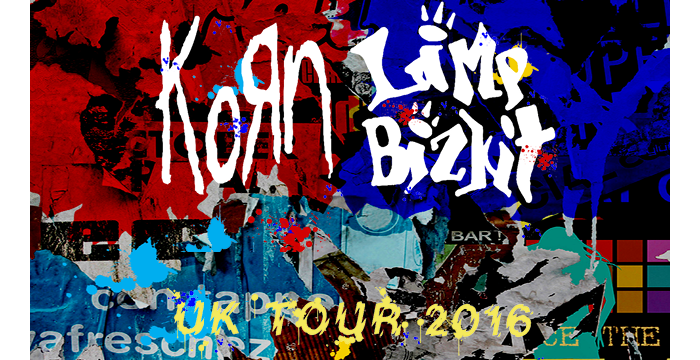 Korn and Limp Bizkit are to hit the round for their first UK dates together in 19 years, with the huge tour opening at Manchester Arena in December 2016.

With a staggering 75 million album sales between them, Korn and Limp Bizkit blazed a trail across the late nineties.  With co-headline tours such as 1999’s Family Values becoming the stuff of legend, they garnered a reputation of being two of the most exciting, controversial and formidable live bands in the world.  Now, in 2016, they will be co-headlining arenas across the UK together once again.

Speaking on their impending reunion with co-headliners Korn and their return to the UK, Limp Bizkit frontman, Fred Durst had the following to say, “You may have experienced a lot of cool concerts in your life, but I can guarantee you that an evening with Korn and Limp Bizkit will always and forever be your favourite. No one brings the party harder, heavier, and more exciting than us. No one! And… make sure you get plenty of rest the night before. It’s time to bring it back!”

Tickets for Korn and Limp Bizkit performing at Manchester Arena on 12 December 2016 go on sale at 9am on Friday 16 September.