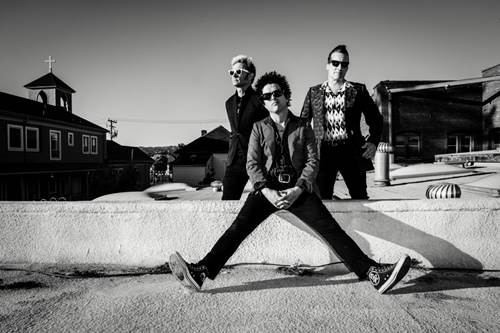 In the run up to their new album Revolution Radio, Green Day have announced details of a new UK arena tour, marking their first dates on these shores since headlining Reading and Leeds in 2013.

Since breaking through in 1994 with the Dookie album, Green Day – Billie Joe Armstrong (vocals and guitar), Mike Dirnt (bass) and Tré Cool (drums) – have become one of the world’s biggest bands with over 75 million worldwide sales. After a succession of hit albums, their 2004 rock opera American Idiot reignited the band’s popularity with a younger generation.

“Of course the world has lost its collective mind… and me, Mike and Tré are lost souls too,” said Green Day frontman Billie Joe Armstrong about the upcoming album release. “Revolution Radio is a movement for lost souls to come together, dance together, sing together, and most of all, find each other. That’s what the spirit of Green Day has been about since day one.”

Green Day have won five Grammy Awards: Best Alternative Album for Dookie, Best Rock Album for American Idiot, Record of the Year for Boulevard of Broken Dreams, Best Rock Album for the second time for 21st Century Breakdown and Best Musical Show Album for American Idiot: The Original Broadway Cast Recording. They were inducted into the Rock and Roll Hall of Fame in 2015 in what was their first year of eligibility for induction.

Tickets for Green Day performing at Manchester Arena on 6 February 2017 go on sale at 9am on Friday 9 September.