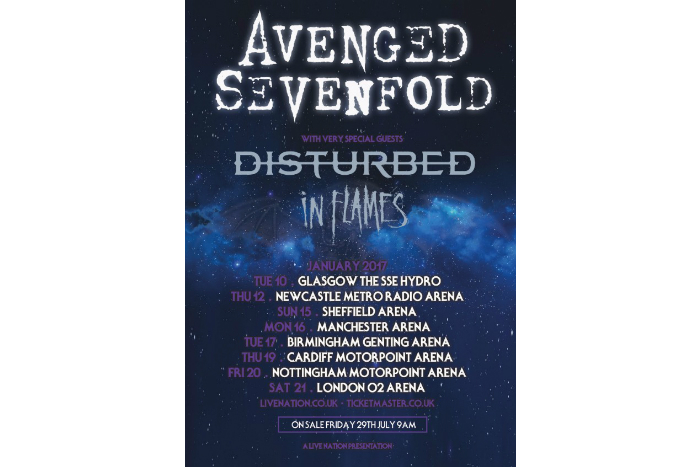 Avenged Sevenfold are set to return to the UK for an eight date tour in January 2017, including a performance at Manchester Arena.

The tour sees them returning to the venue which they sold out in December 2013 whilst celebrating their number 1 album Hail To The King.

Avenged Sevenfold achieved worldwide success with a string of best-selling albums — including their 2005 platinum breakthrough City Of Evil, 2007’s Avenged Sevenfold, which topped the Billboard Alternative, Hard, and Rock Charts, and two consecutive No 1’s on Billboard’s Top 200 Albums chart, Nightmare (2010) and Hail To The King — achieving Diamond, Platinum and Gold awards for album sales in nearly a dozen countries.

They are set to be support on the tour by Grammy nominated Disturbed, who return after a four-year hiatus and following their latest album Immortalized hitting the number 1 spot in the US.  Also joining them on tour is melodic death metal pioneers In Flames.