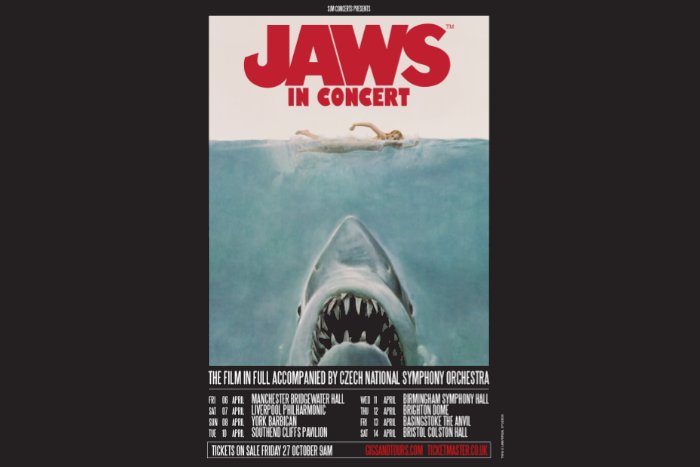 Film fans, prepared to be submerged in music as a screening of Steven Speilberg’s Jaws comes to Manchester’s Bridgewater Hall with the score performed live by the Czech National Symphony Orchestra.

The performance marks one of six regional performances which have been announced following a successful run at the Royal Albert Hall.

Based on the best-selling novel by Peter Benchley, this masterpiece of suspense tells the tale of a small New England seaside community terrorised by a predatory great white shark. Upon its release, Jaws became the most successful movie of all time, and Spielberg has often credited Williams’ iconic score with much of the film’s success. Now audiences will have the chance to experience the power of a live symphony orchestra performing the entire score in sync with one of the greatest motion pictures of all time – the ultimate film-with-live-orchestra experience!

The Academy Award-winning score was penned by John Williams and will be performed live and in sync to the movie.

When and when is Jaws coming to Manchester?

When do tickets go on sale?

Tickets for Jaws at the Bridgewater Hall go on sale at 9am on 27 October.