In Interview: Roxanne Pallett on new film Habit – “we were like a family … a family soaked in blood!” 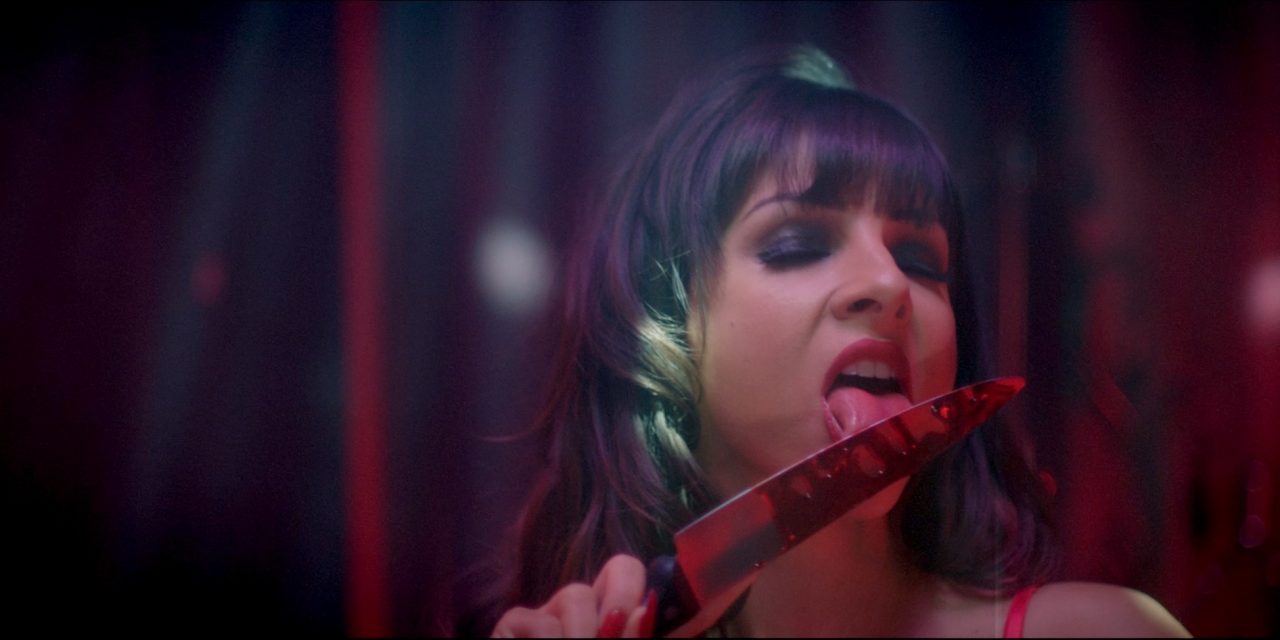 Starring Roxanne Pallett, Habit was launched at Manchester’s Grimmfest last week.  It was an immediate winner with fans.  Though nestling comfortably within the horror genre, it also delves in to the realms of drama and thriller.

The film sees Michael (the excellent Elliot Langridge) drawn into the dark, troubled, underbelly of Manchester where he finds himself immersed in a subculture, preying on the weak and lost, which he could not have envisaged.  Michael, one who is lost, shares a flat with his mate Dig (Andrew Ellis), who rarely bothers to get dressed.  He spends most of his days at the Job Centre until he meets Lee (Jessica Barden). Lee works at a massage parlour, and Michael goes along one night, falling increasingly under the lure of escort Alex (Pallett) only to witness the violent death of a ‘punter’. The owner of the business, Lee’s uncle, offers Michael a job and he accepts. As he experiences blood-drenched flashbacks, Michael feels himself being gradually sucked into a strange twilight world that he doesn’t understand, but finds irresistibly attractive.

One of the central characters of Habit is Alex, played to perfection by Roxanne Pallett.  We were fortunate enough to talk to Roxanne Pallett about Habit and her character in the run up to its premiere at Grimmfest.

For Roxanne, taking part in the Manchester-filmed, Manchester-set movie seems to have been an easy decision.  “I fell in love with the concept of it when I was sent the script”, she explains.  [Habit] “is based on the Stephen McGeagh novel.  And there’s something magical about a film that’s based on a book.  I just think that there’s something extra special about that.”

But it wasn’t just the fact that Habit is based on the Stephen McGeagh novel which attracted her to the role.  “It grabbed me really because it was raw and real and invites you into this underworld of those that don’t conform.” She continues, “It looks at the lonely and the isolated and those that don’t fit in this kind of underbelly of Manchester that has so many characters to it.”  The beauty of Habit is that each and every character is damaged; there are no heroes, only villains (albeit some are more villainous than others); and we don’t know whether to cheer on the characters in their bloody escapades or yearn for their demise.

“I’m always kind of drawn to broken and flawed characters”

As with the other characters in the film, Roxanne’s Alex is as equally charming as she is deadly.  “A tough cookie” by Roxanne’s own admission, she is sinister (“I like that” she laughs) and you quickly have no doubt that the seductive Alex could act both remorselessly and viciously, somebody who should not be crossed.  At the same time, she is played with a subtle sensitivity, portrayed as a loyal and caring friend, who genuinely looks out for her colleagues and ‘family’.  “I’m always kind of drawn to broken and flawed characters.  I always seem to play the victim or the villain” she explains.  “I never really play in between. I’m always an extreme character. And Alex who I play in Habit is not about being sexual or tough. I mean on the surface she’s the madam of the brothel and she’s interwoven with all these people’s secrets and lives. But to me, it was about playing her truthfully. I spoke to the writer and Stephen McGeagh and I also spoke to Simeon (Halligan) who is our amazing director – I couldn’t have asked for a better director – and we all decided that it was important to play her in all her truth. So she isn’t perfect, she isn’t that typical glamour puss. She has flaws.  The audience won’t really care about her journey if they don’t relate to her.  So it was important that I made her real and down to earth.  The writer of the book actually said that the character Alex is the one that embodies the honesty of Habit, so I had to really had to play her truthfully.”

Being set and filmed in Manchester brings an added appeal to local viewers, who will no doubt recognise Manchester’s Northern Quarter as the backdrop of the film.  And for Roxanne, filming in Manchester seems to have served a dual purpose, not only showcasing her ‘honorary home’, but also showing a city which in many ways mirrors the characters.  “I’ve been living in Manchester for almost 8 years now. And so I do think of it as my second home. It’s my honorary home. And I’m really proud of this city,” she enthuses, “especially after everything that we’ve been through this year. So to see the Northern Quarter and those lost streets in Manchester on the big screen – all this city showcased – the graffiti, the bright neon lights, it was fantastic. Because a lot of movies focus on London or LA and it’s not often that you get a northern city on the big screen. So it was wonderful, but not only was it set there, but we stayed true to that. And Simeon made sure that we completely showcased every identity of Manchester as well. The softness and then then the harshness.  I think it reflects the characters as well when you watch the film, the optimism of the neon lights in the city centre, but then the dark roughness of the streets with the graffiti.  It almost represents the characters because it’s not just one or the other, you have that mix of light and shade in everybody.”

Habit is set and filmed in Manchester

Filming took place over an intense four week period.  Whilst external scenes were largely filmed around Manchester’s Northern Quarter (“Anyone who watches the film, especially on the big screen, will get a real buzz out of seeing places that they walk by every day if they’re a local.”), internal scenes were shot at Media City.  And that’s where the blood was!  Whilst Roxanne Pallett describes Habit as “a really incredible pacy [movie]”, explaining “it’s a drama, it’s a thriller, you can’t really fit it into a genre” there’s no doubt that there is a strong horror element to the film.  And the volume of blood in some of the scenes speaks testament to that.  “You kind of get used to that sticky prop blood after a while” she jokes, “They send the team to tell you on day one that’s not going to feel nice and then by day ten, you’re so used to it. ”  It’s also something which Elliot Langridge alludes to in the post-screening Q&A, mentioning how once the blood set, it actually ripped off some of his facial hair when he moved – you can start to see how blood became a central theme to the movie.

Though we’re keen not to give too much away about the film, the other central elements to Habit is family, which moved off-screen as well, with but both cast and crew becoming like a family when the cameras weren’t running too.  Speaking of how delighted she was with the film, Roxanne elaborates “I personally think that Habit is one of the movies I’m proudest I’ve been in when it comes to film, to cinema and TV. I am … I’m so proud … not just for the film and the stars … but to the team.  The team were absolutely phenomenal, from start to end, the prosthetics, the costumes, we had an amazing director of photography, he was a tour de force – anywhere, any way and how, he could get that shot, he would get it – and and Simeon, our director.  It was like, it was a dream come true, we were honestly like a family by the end of it … a family soaked in blood!”

“I kind of became a scream queen a few years ago”

Habit is far from Roxanne Pallett’s first foray into horror.  With roles in Lake Placid 3, Wrong Turn 6 and Devil’s Tower, she’s become a ‘go to’ actress for the genre, playing both innocent victim and, as Habit shows, the more malevolent character.  “I kind of became a scream queen a few years ago” she laughs.  And it’s snowballed for her, “The horror audience are so loyal” she continues, “the minute that you tell a story well for them, they really do bring you into the role, which is a real compliment.  Then producers and networks contact me and and want me to star in their show … in the horror genre. I take that as a real compliment and testament to my previous work because the horror genre is so detached from reality that it’s probably the most challenging genre.  You’ve got to suspend yourself as a character in these stories and it’s so heightened and the audiences are so loyal and not just at Halloween, not just October, all year round!”.  “It’s a massive compliment for me that they accepted me and applauded me on” she adds.

As we talk about Grimmfest, which launches later that evening, Roxanne’s love for the film and fans really shines through.  “We’re all really excited” she enthuses, It’s been a long time coming so we are excited to present it to all the fans and all the audiences. People are excited about the story coming to life on the big screen, and to see Manchester on the big screen. I mean I’m so proud to have been a part of it and to have a role in something this big and in this fantastic city. And to see it in all it’s glory in the big screen. It’s going to be fantastic.”

The pleasure which she had being a part of Habit is clear.  “There’s a sequence that was quite jaw-dropping” she continues, “that all of us when we went to the original screening and the cast screening, we just sat at the back of the cinema like teenagers, almost in awe of what we’ve done.  We didn’t realise what we were part of until we watched it back. You’re in such a bubble when you film it and I just hope that it moves people. I’m sure it will. It really is lends itself to a genre of it’s own.”

“There’s always a plot twist in a life, isn’t there?”

As for what’s coming next for Roxanne Pallett, whether there are more horror films on the horizon, television work or theatre, or whether there’s a particular avenue she is looking to go down, she’s coy.  “I find that life doesn’t listen when you make plans. It makes other plans for you – so just be grateful and focus on what you’re doing at the time. And I like the element of surprise in my career. I’m really blessed that I’ve had such a diverse variety of projects over the last ten years. I never like to guess or ask or determine what’s going to come next” she laughs “because the minute you do that- that’s when fate intervenes.  There’s always a plot twist in a life, isn’t there?” – just like any good horror movie.