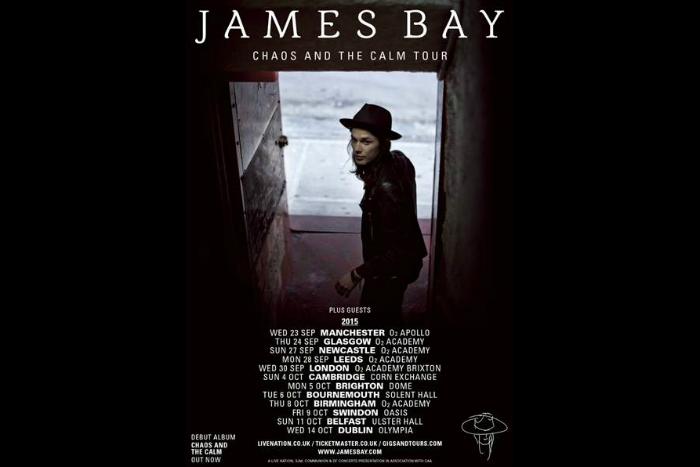 James Bay has celebrated the release of his debut album Chaos and the Calm by announcing a UK tour this September/October which will see him performing at Manchester’s O2 Apollo on 23 September 2015, the opening night of the tour.  The artist is also set to appear at Manchester’s Parklife Festival on 6 June.

The 12 date tour, the Chaos And The Calm Tour, follows the success of his impending sell-out April tour and comes at a time when the singer/songwriter’s stock is massively on the rise, making a name for himself in the UK, Europe, Australia and the US.

Released last week, Chaos and The Calm has won plaudits for its catchy songs full of confessional lyrics and infectious melodies.  The album’s narrative ‎details escapism, self-discovery, and the emotional adjustments required to keep up with James’s fast-changing circumstances over the last few years.  Bay’s musical spectrum spans spine-tingling acoustic balladry to rousing choruses with raging guitar, exploring the musical styles he so cherishes.

Tickets for James Bay performing at Manchester’s O2 Apollo go on sale at 9am on Thursday 2 April.

In Review: Ward Thomas at Gorilla
In Review: Nina Nesbitt at The Ritz
In Review: Gabriella Cilmi at The Deaf Institute