In Review: The Bodyguard at the Palace Theatre 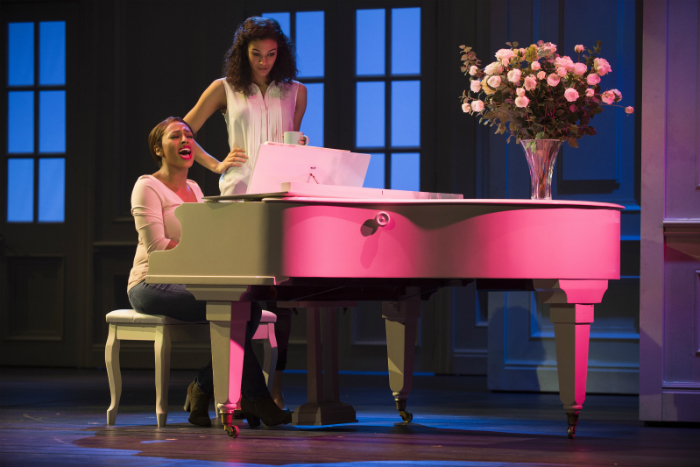 The Bodyguard, based on the 1992 film starring Whitney Houston (making her film debut) and Kevin Costner, is on it’s first tour of the UK and has stopped off at Manchester’s Palace Theatre.  The musical itself has scooped awards during its successful two year London run and it is easy to see why as star quality meets a tremendous sound track and excellent staging.

The premise of The Bodyguard is well known and still strikes a chord with audiences more than 20 years after the film was released.  Singer Rachel Marron is being stalked by an obsessed fan whose actions are escalating to the extent that her manager decides to bring in former Secret Service agent Frank Farmer, who is still reeling from his involvement in an assassination attempt on one of his charges some time earlier.  Needless to say, Farmer manages to ruffle feathers from the outset, upsetting both Marron and her existing team before the pop star and bodyguard find themselves increasingly drawn to each other.

Former X-Factor star Alexandra Burke steps into the role of Rachel Marron.  It’s a role which she reprises after an initial run in the show in 2014.  A fast paced, energetic, performance of Queen of the Night (a little reminiscent of Beyonce in style, complete with blonde wig) gets the evening off to an explosive start. Though Burke’s acting is a little stiff at times, she does show great strength in her performance of the slower musical numbers, which better demonstrate her vocal ability and range.

Stuart Reid performs well as the ever serious Frank Farmer.  The staid persona comes across marvelously, but also makes for a an excellent comedy moment as he performs a hilarious karaoke version of I Will Always Love you which has the audience laughing and cheering.

But it’s Melissa James as Nicki Marron who threatens to upstage the two leads and steal the show.  Her singing is sublime and her acting spot on.  In fact her rendition of Saving All My Love is nothing short of sensational and the duets with Alexandra Burke of Run To You and I Have Nothing pose the interesting question of who should actually be in the lead role.

The stage setting is excellent and makes clever use of recorded film and narrowing curtains to focus attention on certain parts of the stage or open up the whole of the area.  The effect is wonderful and keeps attention exactly where it should be and also allows for great perspective.

But it’s the music which is the key to the show, with outstanding numbers running throughout.  In fact it’s noticeable that the audience are at times desperate to sing along and dance to hits like Greatest Love Of All, So Emotional and How Will I Know (which also makes for a humorous moment as it is performed by the ensemble karaoke style).

There is a risk of the show almost turning in to a Whitney Houston tribute show and the fact that the vast majority of songs are performed by Alexandra Burke together with the occasional dubious musical interpretation of hit songs, does increase this risk, however, there is just enough happening elsewhere to avoid this.  There are also a few moments where perhaps The Bodyguard would benefit from a little more storytelling and from slowing down – in particular the transition of the relationship of Rachel Marron and Frank Farmer from pop star/bodyguard to lovers is a little rushed and feels a little forced.

Overall, the show hits the right notes and the classic hit film is done justice on the stage.  It’s a show which will no doubt continue to be loved by audiences for quite some time yet … and with a soundtrack filled with outstanding musical hits, how can it fail?

The Bodygard is performed at Manchester’s Palace Theatre until 9 January 2016.

In Review: The Last Tango
In Review: Guys and Dolls at the Palace Theatre
It’s beginning to look a lot like Christmas in Manchester