In Review: Hamlet at the Royal Exchange Theatre 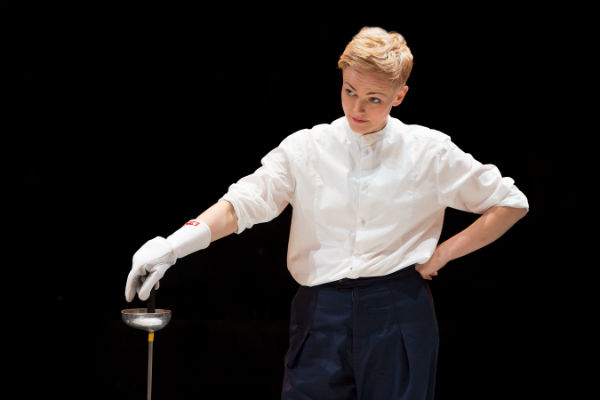 Last night we had the pleasure of going to watch one of Shakespeare’s most infamous plays of tragedy, loyalty, love, betrayal, murder and madness – Hamlet.

In a production that would, in Shakespeare’s day, have been performed by an all-male cast, Maxine Peake gave an outstanding and impassioned performance in her title role, keeping alive a radical tradition that Manchester has been a part of since the 18th century, that of a woman playing Hamlet (Sarah Siddons in 1777, Charlotte Cushman in 1847).

Sarah Frankcom’s production, delivered on many levels and succeeded in giving its characters a fresh feel in a re-working of gender roles and scripting.

With cropped blond hair and an amorphous blue suit, the androgyny of Peake’s appearance stood in contrast to the energy, verve and quick-witted character who alternately strutted and fretted about the stage, trapped in his own conscience and yet more alert than ever to the family politics and drama that surrounds his own torment.

Hamlet’s distrust and intuition about those around him is clear – he doesn’t have to be looking at Rosencrantz and Guildenstern to be able to tell that they are informing on him to his family and it is actually family that takes the centre stage in this production. With no Fortinbras, politics and the threat of war are significantly absent and the focus and feel of the play is, instead, that of a family drama.

Katie West plays a fragile Ophelia whose pain at the loss of her mother reveals her self-harming, though the removal of her clothes as she descends into a grief-stricken madness seemed a little superfluous given that we learn very shortly afterwards that she drowned in a brook, weighed down by her heavy, wet clothing.

In an interesting and original use of props, a pile of old clothes is dropped onto the stage and used for the burial scene, with a knitted jumper bundled up to represent the skull of the man we all know so well – Yorick. Michelle Butterly was particularly entertaining in this scene as the Scouse gravedigger.

However, it was the use of flickering light bulbs and sound effects used to accompany the moment when the ghost of Hamlet’s father appears that was particularly special and helped to evoke a touching and dramatic moment between father and son as John Shrapnel’s Claudius appears to be re-experiencing the agony and suffering of his murder.

The ability to hold its audience captivated, despite its three hour length, is testament to the success of this production and the triumph of Peake in this role. The ability to hold the stage and audience for such a length of time, often with soliloquy and with such energy and passion as was demonstrated by Peake last night, makes this production well worth a viewing, for what it may lack in roundedness in terms of the absence of any political context, it more than makes up for in its enthralling performance.

You may also be interested in:
In Review: Much Ado About Nothing
In Review: Fame at the Lowry
In Review: New opera Mysterious 44