In Review: Elevant at The Fallow Cafe 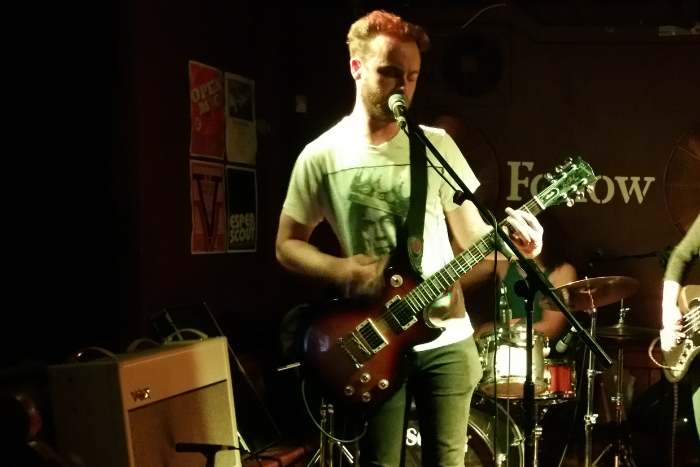 Liverpool-based Elevant have been racking the gigs up recently.  In a relatively short period of time they have developed from a recording vehicle of Michael Edward to a trio with two albums under their belt.  Pitching up at The Fallow, we headed to to catch them live and see if the inventiveness of Edward translates to the live arena.

Opening the bill is Bad Molly, a Manchester based group, who take us by surprise.  Listening to their set, there are vintage rock ‘n’ roll themes coming through, but with an updated twist.  Lead by Tyron Freeman, who oozes charisma, they put on a strong set.

The four piece of Tyron Freeman, Sam Cartwright, Adam Kenny and Lucas Berry were effectively warming up for a larger gig the next night at The Ritz, but didn’t hold back, treating the small crowd to an excellent set which drew on the influences of the likes of The Stones and vintage Aerosmith.  They are up-tempo and frequently display some awesome riffage – second song of the night, the excellent Silvergold witnesses some stunning guitar work as well as the traditional picking of guitar strings with teeth!  In fact, Bad Molly are going at is to such an extent that Freeman breaks a guitar string early in the set and has to borrow a guitar from Duke Mercury’s guitarist.  In the true traditions of vintage rock, they also display a fair amount of swagger and confidence.

But despite the up-tempo riffage, there’s more to Bad Molly than riffs and pace.  She Is The Sun cleverly and intricately layers grandiose arches over a laid-back, mellow rhythm whilst the stunning track Choker moves well from a sinister feel through to a soaring riff and climax as the band displays variety, and a multi-layered approach. 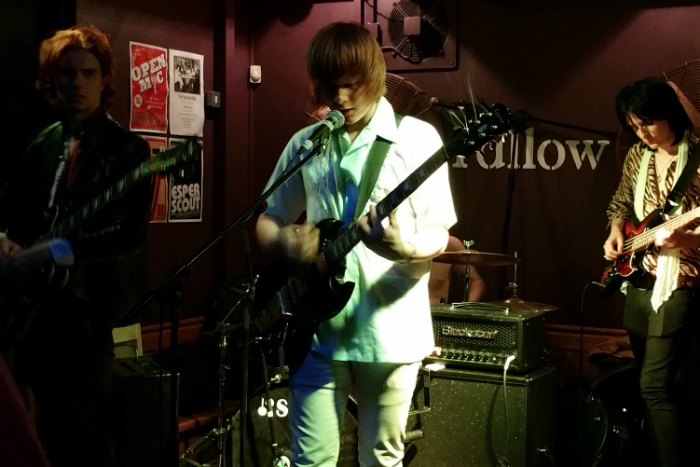 Duke Mercury are an entirely different proposition.  Comprised of duo Liam Vaughn (vocals and guitar) and Connor Dowd (vocals and drums), Duke Mercury present a set of noise-rock.  They scream, grunt and occasionally sing their way through their set.  It’s spiky and punky.  Unfortunately, though it’s all rather disjointed and tuneless and fails to captivate the crowd.  By around the fourth song of their set around half of the audience have made their way out on to the roof terrace and they are left with just a small audience to play to.

This doesn’t dampen their enthusiasm, and they continue to roar through their set, and early White Strypes and Offspring influences can occasionally be heard.  Visceral tracks are adjuncted to psych and experimental moments, but they seem a little forced, there is no blending, simply stark contrast within ‘songs’ and the melodic moments don’t hit the spot either.  There is the odd moment of muzak almost chaotically juxtaposed with the heaviest of noise which makes for an even more bizarre experience.  It’s sometimes difficult to tell whether they have simply ended one song and moved on to the next or each distinct passage forms another disjointed part of the same track.

By contrast, the trio of Elevant take changing themes and blend them, delicately creating variety and interest in the music.  Fronted by singer/guitarist Michael Edward, who initially launched Elevant as a solo recording project, they display great energy, constantly moving around and dancing on stage.  Tom Shang on drums and Hannah Lodge on bass make up the trio and provide a strong, rhythmic driving force to build on.

Elevant’s music is varied.  The tempo frequently changes, long instrumental periods are kept interesting with ever developing themes and there are nice interchanges between the guitar and bass.  Damage demonstrates their style perfectly as a hard hitting introduction, complete with Edward’s trademark screwdriver on guitar string effect, makes way for an excellent dreamy guitar interlude.  The styles complement each other perfectly.

There are moments, when it feels that the addition of a second guitar to fill out the sound a touch more would be beneficial, but the acoustics are far from hollow and it evokes all the right emotions.  There’s aggression, there’s a sinister feel and then there’s a hazy floaty feel.  Drawing on influences including psychedelia, noise rock, shoegaze and rock, Elevant certainly hold the interest of the crowd and mix things up, but in a delicate intriguing manner which does not feel at all forced.