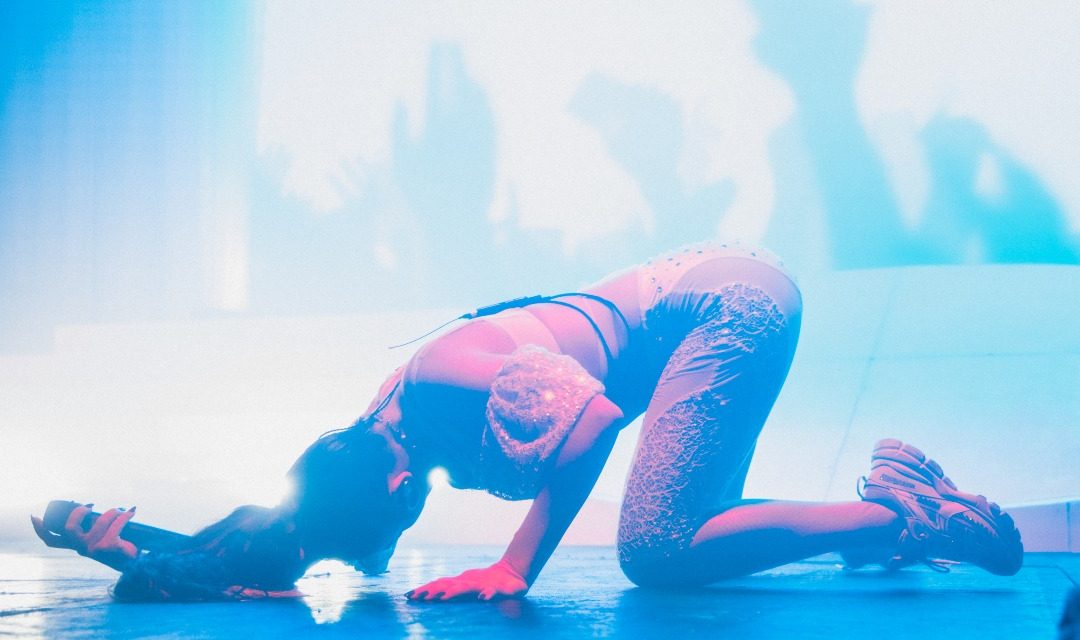 The last time I saw Charli XCX headlining in Manchester was back in 2015 at Manchester Academy 2.  That night she struggled under the weight of illness, her voice causing her difficulties, but still mesmerised the audience to which she repeatedly apologised.  Tonight she’s at 100%.  And 100% Charli XCX is a show to behold.

The full throttle gig gets of to an electrifying start with Lightning and the crowd immediately goes wild.  They dance, cheer and sing every word back to her – and they don’t let up at all.

Accompanied by two dancers, Charli XCX bounds all over the stage, covering almost every inch.  She moves back and forth between each flank of the stage making sure that the fans feel connected throughout.  Often backlit, she occasionally appears as a silhouette, adding an element of mystery to the impressive visuals.

She also promises the audience that they will build up a sweat.  She isn’t wrong.  The set is largely upbeat, with the crowd responding in kind as she delivers  an opening salve of tracks including Gone, Move Me, Constant Repeat and Baby.  There is then a slight pause for breath with the more thoughtful Yuck signalling a change of pace and more reflection, which follows through into Every Rule and Party 4 U.

Despite occasional interludes and reflective moments, the overall feel is largely upbeat.  It’s a winner.  She keeps the crowd going and the energy filling the room is palpable.

Throughout her dancing is perfectly choregraphed and executed.  They form the ideal accompaniment to her extremely strong vocals as she shows that a large amount of care and effort has been put in to the show and she is determined to deliver for her Manchester fans.

The gig, at Manchester’s Victoria Warehouse, is understandably built around latest album Crash, but that doesn’t stop her delighting the fans with up-dated versions of some of her earlier tracks with Visions and the massively upbeat 1999 amongst those making an appearance.  And there’s a particularly thunderous response to the ever impressive Boom Clap.  In truth, there are a number of other tracks which could have made the setlist, showing just how much strong material she has produced over the course of her career and albums, but there can be no complaints about those that did.

Ultimately it’s Beg For You which steals the show.  The track lands perfectly, striking home with fans and allowing Charli XCX to really enjoy the moment.

By the end of the show, the fans are in raptures.  It’s been an incredibly strong performance and gig and one which will definitely have fans coming back for more.  And yes, by the end they had built up a sweat.