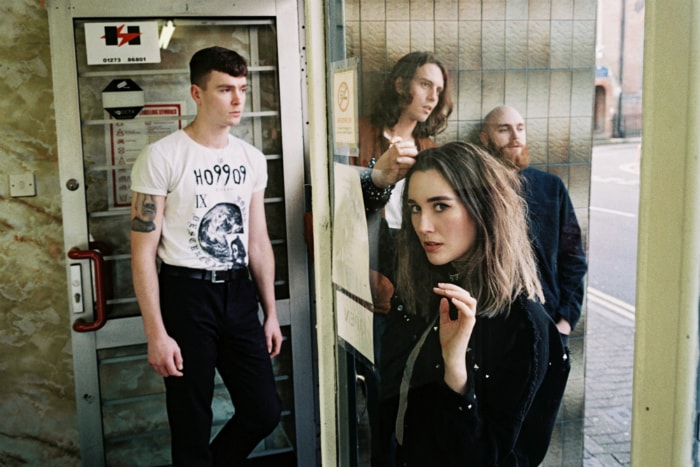 They’ve built a reputation on sensational live shows, so when Yonaka were announced to appear at Manchester’s The Ruby Lounge, we couldn’t pass up the opportunity to catch them.  We also managed to get a bit of time with them backstage to find out what makes them tick, their new EP Heavy and future plans.

It’s only been a couple of weeks since they were last in Manchester, performing at Neighbourhood Festival.  When we saw their name on the Neighbourhood Festival line-up alongside the likes of Anteros, The Amazons and Fazerdaze, we’ll admit our eyes lit up.  And discovering that they were coming back to the city on the Hopscotch tour, with Anteros and Stereo Honey, curated by Radio X presenter Jack Saunders, saw no less of a reaction.

They’re now on to the third date of this tour.  It’s one of 12 Hopscotch Tour dates, before they are back out almost immediately on their next run of dates – effectively 28 shows in extremely quick succession.  To the Brighton-based foursome, being out on the road must by now be second nature.  It’s how they have become known, built a massive reputation and developed an ever-growing fanbase.  You can almost tell that the number of gigs they perform, number of towns and cities they visit and number days on the road is starting to play tricks on them.  Discussing the first couple of nights on this tour, singer Theresa Jarvis comments how the tour seems to have been really short so far almost to other band members’ surprise as they quickly realise that they have only played two shows so far.

“it comes from your heart”

This latest series of dates come after the release of their five-track EP Heavy at the beginning of October.  Heavy is, a very personal EP “it comes from your heart” they declare, which Jarvis acknowledges is “not the easiest stuff to talk about” and “scary”.  At the same time, she accepts that she finds it easier to pen a song than discuss things.  “If you’re writing a song, it feels more OK to do that [than discuss the contents with a lot of people]” she explains, “I think it allows other people to just think about stuff like that”

Heavy draws upon a range of influences.  Peel back one layer and you find a different sound underneath.  Rock gives way to indie, there’s pop in there, a good bluesy feel and even a touch of Motown if you listen hard enough.  This is far from forced.  Whilst some bands head in to the studio with a sound in mind and intentionally set out to incorporate certain elements, for Yonaka, this wouldn’t feel right.  “It’s quite an effective mix of different influences, come together” offers Rob Mason on the textured sound which has made its way on to Heavy.  And it’s here to stay – “It happened totally naturally and we just followed what we’ve done – it’s our sound and it’s what we’ve been recognised for.  To change it or try to make it be something else just wouldn’t be [natural].”  “We wouldn’t be able to do it” reaffirms Theresa Jarvis.

The writing process often involves Jarvis writing a melody with the guitar, putting the basis together before they collectively take the barebones and start adding to it, getting a whole song together with each sticking to their own instruments and bringing their own influences to the table.  “We’re just trying different stuff” she explains.  And this process will be in full flow before too long as they intimate that they would like to put out a full length album before the end of 2018.  “Fingers crossed” comments Mason.  Although they do temper expectations with Edwards commenting that they want to take their time with it and Jarvis adding that it will be released “when the time’s right.”

“That was quite good. That was … actually, no. That was really stressful!”

Despite the amount of gigs they perform, Manchester clearly sticks in their memory – particularly for one memorable gig alongside Frank Carter at Manchester Academy.  “That was quite good. That was … actually, no. That was really stressful!” recalls George Edwards with a smile on his face. “We got stuck in a lot of the shittiest traffic ever” he explains, leading to the band pretty much running in and almost straight on to the stage with no soundcheck and no chance to prepare.  “It was just too much!” laughs Theresa Jarvis.  Despite that, the overwhelming common consensus amongst fans and reviewers is that Yonaka were, as expected, outstanding that night.

It was no surprise to see Yonaka shortlisted for Live Act of the Year at the Independent Festival Awards.  The nomination followed a summer in which they became a staple on the UK festival circuit, appearing at Reading & Leeds, Download, Bestival, Dot to Dot, The Great Escape and many more.  2017 has also seen the band playing some of their biggest shows to date, selling-out London’s Borderline, supporting The Libertines at the 4,000 capacity Brighton Centre and moving on to ever bigger venues as the appetite for them has grown and grown.  The group has also landed strong airplay with the likes of Huw Stephens, Annie Mac and MistaJam all voicing their support for the foursome.

But as the band grows, as the venues become larger, as they move up the stage order at festivals, one constant remains – their performance on stage, “We treat every gig the same. Whether it’s 100 people, a thousand or one!” explains Theresa Jarvis.  And by the same they mean full of energy, playing back and forth off the crowd.  “We just … drive up the energy.  … Obviously when there’s lots of people there to entertain it’s amazing. It helps because you’re going back and forth.  We give it 110%  whoever is there.”  Just a couple of hours later, the band prove their point as they thrill the crowd at The Ruby Lounge.  It’s a far cry from guitarist George Edward’s shoegaze days he jokes, “in previous bands I used to be like a shoegazer. … one leg moved occasionally. But with this band it just comes so naturally.  At first it was a defence mechanism because I was quite shy playing live. So you’re not moving around. You can’t see anything. You can’t see anyone’s face. But when you do, you start moving on to the next one or whatever. It’s like a shield. … But now I can’t imagine backing off.  If I am standing still it’s not a good show for me.”  Jarvis nods firmly in agreement, echoing the sentiment.  Drummer Rob Mason is keen to add that that the whole Yonaka approach to gigs is as organic as their writing.  “When we go on stage we don’t think, ‘Oh, we’re gonna make sure we do this new dance move we practiced in the fucking studio all day. Or I’m going to do this with the guitar’. It’s really organic. … It’s the same in practice – what you see on stage is pretty much what we do when we’re practicing ourselves in the room when no one’s there! Having that energy it gets all of us going.”