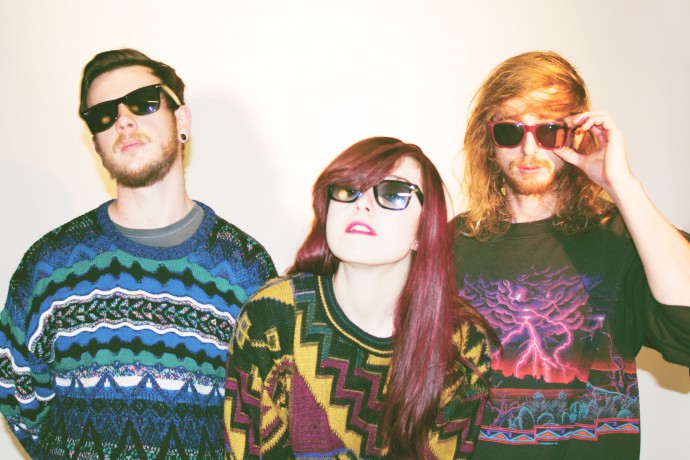 For False Advertising, it’s been a rapid rise on the Manchester music scene.  In fact, they only played their first gig together in April.  But since that first public outing, there has been no looking back – they have already released their debut album (an absolute stormer of an album it is too), garnered significant praise in the music press and established quite the reputation.

The trio of Jen Hingley (vocals, guitar and drums), Chris Warr (vocals, guitar and drums) and Josh Sellers (bass) have come this far doing everything themselves, a complete DIY approach.  It was controlled and considered as the band carefully went about preparing themselves, writing enough material to fill a set (and in fact an album) and making certain that what they had was right.  It lead them to be almost hidden – an almost secret band with practically an album of material ready to thrust on the public.

“I felt very strongly, like very, very strongly, that we didn’t want to put anything out until we were completely happy with it.” comments Jen.  “So it’s for that reason that I was very strict so that even when these guys played recordings to our friends I got really, really angry because I thought ‘they’re going to think we’re not as good as we could be’ so it was very conscious.  When we finally did launch, I wanted us to launch for a reason and when we did it was because we got a supporting slot at the Deaf Institute with Turrentine Jones, which was so generous of them and a fantastic opportunity at a great venue.  We were getting to the point when we were nearly happy and when we knew that was on the horizon we were like ‘okay, we’ve just got to launch, we’ve got to make sure we’ve got everything.  We can’t just put a song out to our friends, we have to have a website, we have to have social media profiles, we have to have a video we can share and a soundcloud account.” 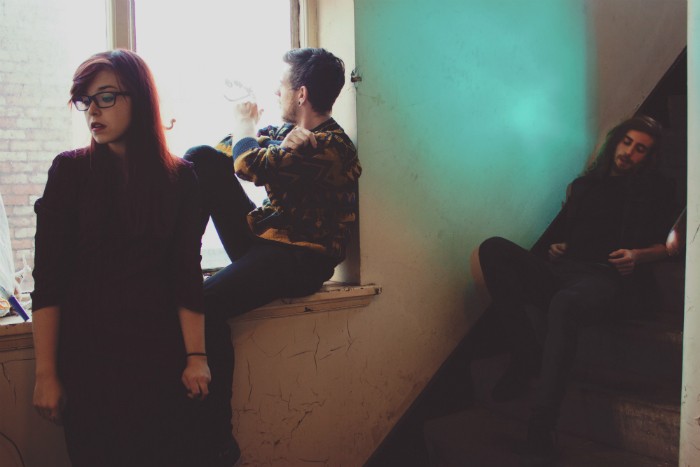 It’s clear that the whole of the band have a strong desire to ensure that things are done properly.  That hard work and preparation are key.  Josh adds – “It was a classic case of fail to prepare, prepare to fail.  You want to make sure that everything is ready and done properly, otherwise you just fizzle into existence rather than have impact.” And the fizzling is something which Chris Warr had witnessed many times.  “From my side of the fence I’ve been working in promoting for six years in Manchester and I’ve seen it time and time again where the band will do a demo here, a track there, this bunch of gigs.  They have a set but half the songs aren’t that great and they’re on a slow rise” he observes.  “And it’s too slow.  We wanted to do it on an accelerated programme, so that’s why we held back.”

But once they announced themselves to the public, there was an immediate buzz.  More gigs followed and a reputation for strong performances followed over the next few months before the release of their self-titled album.

The trio had been in bands previously, and had also been band mates before False Advertising took shape.  The experiences and writing which they had done previously served to be invaluable.  Jen recalls “Chris and I have been writing together in different ways for a few years and we had an old band which Josh was a member of and that was my first experience of song writing, learning what was involved.  So that was like the practice run and disbanded quite quickly.  We sat down and thought about what to do next because we enjoyed it.”  It was a good learning curve comments Josh, who observes that you can learn something from being in a band no matter how successful, how good or even how bad it is.  “It sort of forced me and by extension Chris, to start again and think about what kind of band I wanted to be in and write for” adds Jen. “And at that point I felt confident enough to figure it out.  I wrote a track, Breaker, it was one of the first tracks I wrote and we then worked on it together and figured the rest of it out.  I think I still have the original demo of that.”

That track, Breaker, went on to be the first track on the False Advertising album and its significance is not lost on the trio.  “It is the one which gave us direction so it felt right to put it first and it dictated to us the sort of sounds we would use down the line and the type of drum beats” notes Chris.  “One of the things that’s unique about the way we did things is that when we started the band me and Jen didn’t really play drums, so we programmed them all which gave the drums a slightly unique flavour and then we learned to play the tracks as we wrote them and that went on to influence us as we went on.”

The drums are an interesting point to note for False Advertising.  People who catch them live for the first time are surprised to see Jen and Chris rotate not only on vocals but also on the guitar and drums.  It adds to the variety, keeping things fresh and interesting throughout (not that their music needs anything extra).  It’s also in keeping with the DIY approach which underpins everything they do as Chris comments that although the idea to rotate was raised early on, making them slightly different and giving them a bit of an edge, neither of them had significant experience of drumming, although they had both ‘dabbled’.  Jen is keen, however, to point out that she did have six months of drum lessons when she was ten years old!

The reaction to False Advertising’s debut album was overwhelmingly positive.  Press and fans alike have enthused about their debut and it’s something which has clearly pleased the band.  “We’re very honoured and everyone’s been really super nice” notes Josh, “which is nice to hear as we put a lot of hard work into it.  The last thing you want to hear is ‘oh it’s rubbish’.”  Jen jokingly adds “I don’t know … I’d quite like that!” before Chris adds that the response to their album gives them the fire to carry on. 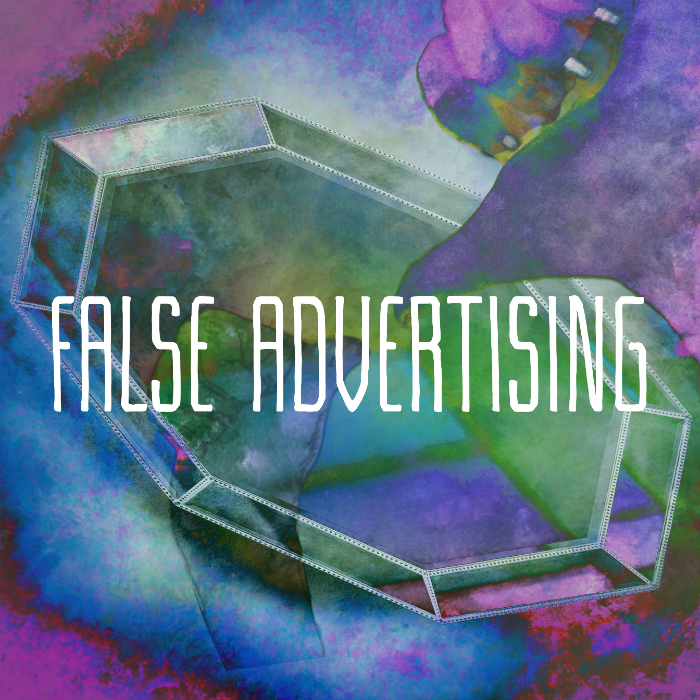 There’s no doubt that the DIY approach has given them the freedom to work, write, produce and plan as they wish.  It’s an angle which many bands and artists struggle with.  They hit stumbling blocks along the way, make huge mistakes, sometimes causing themselves no end of problems, but for False Advertising there doesn’t appear to have been any of that.  “I think it has been 100% beneficial as it has forced us to be independent and learn everything” observes Jen.  The rest of the band agree.  Josh notes that they are more knowledgeable of the whole industry because of it whilst Chris points out “I can’t say we knew that much about PR or plugging when we started out so it’s been good to learn those things.  And going forward if we do have to relinquish control of anything we’re going to know what we’re talking about.”  When asked about their plans going forwards, it’s clear that the DIY approach is something they are determined to repeat and, although they are open to working alongside other people, but it’s clear that the trio want to retain control over their direction, creativity and overall decision making “I think we’re looking to [continue the DIY approach], as we grow” Jen comments, “Because we have grown, there’s more things to do, so we’re looking for the right people to collaborate with and learn from, but in a way that’s true to us instead of handing over the reins”

But as the ‘behind the scenes’ aspect of False Advertising grows and evolves, can we expect the same of their music?  Their influences and comments hint that this is certainly possible.  They cite Smashing Pumpkins, Deftones, Brand New, Incubus and Radiohead amongst their influences and are keen to point out that they agree on a few core bands which they favour “We tend to agree on quite a few core bands which we all love” confirms Josh “and that’s part of the reason why we’re friends, because we were all friends before we were in the band.”  “Most of those bands are really multi-faceted” adds Jen “Take Radiohead for example.  We can enjoy one of their more sparse electronic songs as opposed to one of their earlier more disjointed ones.” Josh continues “compare that with early Incubus and it’s like really hard funk” … Chris – “and it turned into really poppy new metal towards the end.  But we love bands which evolved and all of those bands have evolved.  They don’t have a formula per se and it’s their artistry which shines through.”  Josh – “It’s good to watch them grow as well.  If you take Incubus again for an example, you listen to the majority of their songs and they develop as their albums do. They go through a style change.”  Chris – “it makes for a better story.  It’s more human”

Sitting with them as they discuss music, it’s overwhelmingly obvious that the trio are genuine friends, highly knowledgeable and hold a real passion for music.  And that makes complete sense.  Each band member has been involved in music from an early age.  Jen comes from a classical background, having attended music school and studied violin to grade 8.  Chris points out that he took every opportunity he could to study music, before going in a more technical direction when he was 15 or 16 and then on to a Music Technology degree.  He was in bands throughout.  Josh has always been around music – his father being a bass player and guitar player meant that Josh was always around rehearsals and practically grew up with a guitar in his hands.

So Josh is a guitarist too?  Yes.  Anybody who has seen False Advertising play live before, as we alluded to earlier, will know that the guitar, drum and vocal duties are shared between Jen and Chris, who interestingly change around mid-set, whilst Josh plays the bass.  Could there be another shuffle of the pack, after-all Chris can also play the bass?  “Ironically, we don’t let Josh play guitar” Chris says, “however he is the best guitarist out of the three of us.  But that’s something which may change – we are an evolving band!” before Jen adds “We already swap two instruments, so why don’t we swap three.”

The band are keen to build on the momentum they have in making as much out of 2016 as they possibly can.  If they continue to rise as quickly as they did in 2015 and produce material of as high calibre, then the sky really is the limit.