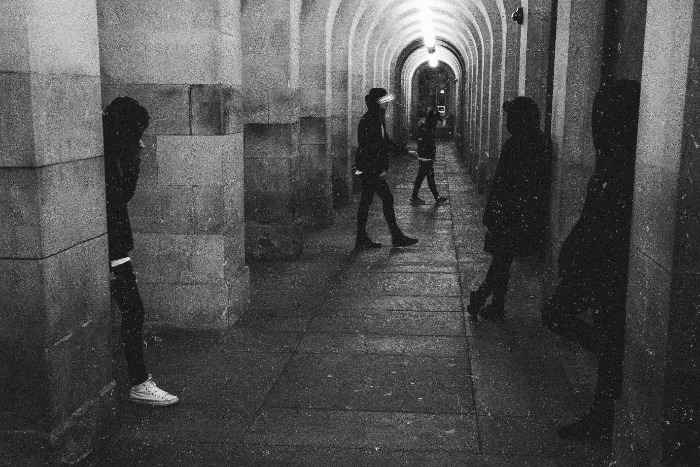 Manchester band LOAstate have been largely shrouded in mystery, but there’s quite a buzz about the group who will perform their debut headline show at YES Manchester on Saturday.

After two excellent releases (Why Me Why? and Love As You Want It), a performance at Neighbourhood Festival 2019 (incredibly it was their first official show) and some great guerrilla marketing over the weekend (including an awesome teaser video), their gig is now less than a week away.  There’s something a bit special about LOAstate – so now’s the chance to catch them and say that you were at their first headline show.

We caught up with LOAstate to see how preparations are going, how they found performing at Neighbourhood and plans for world domination.

“Dark vs Light – Chaos vs Order”

You’re gearing up to your headline show at Yes Manchester. What are your thoughts as you approach the gig?

We can’t wait for it. This was a goal of ours and we’ve been preparing for it for a while, so we feel ready. Looking forward to meeting people and introducing them to who we are.

What can fans expect from the show?

Dark vs Light – Chaos vs Order

How are you preparing for it?

We had a great opportunity to play NBHD festival for our first show last month at Deaf Institute – this has helped us prepare well from a live perspective. Also plenty of man hours in the studio building our show. Last weekend we did a couple of guerrilla marketing pop up events. Scaling the streets of Manchester at night, in a tour van projecting our logo onto buildings & venues, giving away exclusive merch and getting to hear people’s stories. This is the first one, but won’t be the last.

The show is coming a few weeks after your performance at Neighbourhood Festival. How did you find the festival and experience?

This was a perfect way for us to come out as an artist from a live perspective. A prestigious venue, which was full, so thanks to those who made it down so early to see us, we really appreciated that. The festival itself offered everything you wanted as an artist and a gig goer and is getting better each year.

For people who are not familiar with your sound, how would you describe it?

We jumped out of indie rock world and fell straight into hip-hop world, so there’s definitely elements of both. We’re getting a few Linkin Park [comparisons] which we like cause Hybrid Theory is an album for us and 21 Pilots who we respect massively.

“we are always creating, writing and recording”

What are you currently working on?

Other than preparing for this show, we are always creating, writing and recording whether that be demos in our studio or art content for our social media campaigns. We are back with our amazing Producer Matt Terry at Vada Studios in December to add to the collection we have been creating since 2017.

What inspirations (musical and subjectwise) do you take in to your music?

A lot of Kendrick & Kanye, loads of philosophy and psychology mixed with some Fincher, Kubrick & Nolan. Influences change all the time with moods but as a whole I’d say we get a lot from the above.

You’ve been together for a little over two years now. How have things evolved in that time?

A bit taller, bigger workload and James cut his hair. Things are evolving everyday for us, our minds and ears are open more than ever before. The last 2 years have been a monumental learning curve for all of us and long may it continue. We see it as we haven’t even got going just yet…

To take over the world, pinky. We continue creating, reflect on what we have already created and plan for our year, 2020.

When do LOAstate headline at YES Manchester (The Pink Room)?