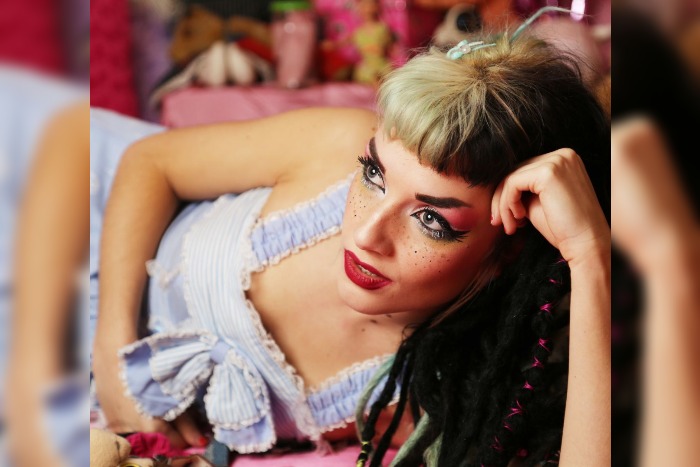 Just a couple of months after Hands Off Gretel’s stunning show at Retro, front woman Lauren Tate returns to Manchester for a solo performance at The Dancehouse.  She will perform at the venue, supporting Ginger Wildheart and the Sinners.

A singer, songwriter, producer, director and artist, Tate is set to deviate from hard-rock/grunge-punk of her current band Hands Off Gretel, to a softer, raw Americana sad-pop sound.  The performance comes after she released her first solo album 5 years, Songs for Sad Girls.

The album has been released through her own label Trash Queen Records, with Lauren Tate recording and self-producing 11 of the 14 tracks in her home studio.

Speaking about the album and self-producing it, she explains, “I planned to get my album produced by someone when I could afford it, but there was a certain magic and honesty captured in my recordings that I knew would really move people. My lyrics are honest and brutal with songs about domestic abuse, body image, feminism and fear of dying. I wanted it to sound like a girl writing in her diary, unapologetic and imperfect like real girls are.”

“It was important for me to keep the album unapologetic and blunt, with lyrics addressing hard to swallow subjects such as self harm, gun violence and abusive relationships in a real way like something I’d write in a diary,” continues Lauren. “I was inspired a lot by 1950s era love songs especially those that mostly painted an image of sad lonely women in a patriarchal society. ‘Can’t Keep My Hands Off You’ and ‘He Loves Me’ are songs written about mental and physical abuse within a relationship were the woman is unaware that she is being mistreated. Most lyrics I write are from my own experiences but not all of them, the ones that aren’t my own experiences are experiences of my friends and fans who’ve wrote to me about mental health and relationships with kids in my generation feeling voiceless in a world that is too busy and chaotic to listen to them.”

In addition to self-producing and recording all the instruments on the album, she also designed the artwork and merchandise.

When does Lauren Tate perform at Manchester’s Dancehouse?

Lauren Tate supports Ginger Wildheart and the Sinners at Manchester’s Dancehouse on 17 November 2019.