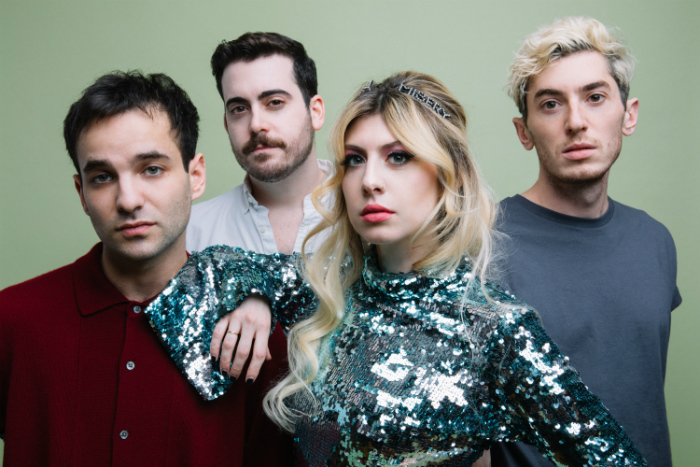 Ahead of their return to the UK for a tour culminating at Manchester’s Deaf Institute, we chat to Charly Bliss about writing, recording and the pivotal points in their career.

It’s fantastic that you’re coming back to Manchester.  What were your impressions of the city and fans last time you were here?

We’re so excited to come back to Manchester! We had so much fun last time we were there, it was the day before Young Enough came out and we all had insane restless energy and luckily everyone at the show was down to dance and go nuts and meet us at our level.

Thankfully, we’ve not had to wait too long for you to return.  What has brought you back so quickly?

What can fans who haven’t seen you before expect from your show?

We play high-energy shows that are super cathartic and fun and emotional. I tend to wear some kind of enormous, sparkly pink outfit!

It’s well known that you are huge fans of performing live – what is it about the live setting which means so much to you?

So much of having a career in music is spending time in a very isolated bubble with your bandmates, whether it’s in the car for 12 hours a day or while you’re writing and recording. It’s easy to overthink things in that setting, but when we play shows and get to interact with our fans and see them connecting to the music, it all feels very meaningful and rewarding.

You’re now almost a decade since the start of Charly Bliss.  I read an interesting article recently about the business side of things and how you set about things when you originally got together.  Would you at all change your approach now?  Do those early days influence decisions you make now?

I wouldn’t change anything! I feel really proud of how hard we’ve worked and how far we’ve come. We kept pushing and pushing and learning from mistakes and growing over time for nearly a decade and I’ve learned so much from doing this. I wouldn’t have learned nearly as much if everything had just suddenly fallen into our laps!

People often look at pivotal moments in a band’s development.  The tour with Veruca Salt is often sited as one of yours.  Have there been any other key moments?

That was a very long time ago! Since then we’ve opened for so many of our heroes, like Bleachers, CHVRCHES, and Death Cab for Cutie, and I think the release of both of our records have felt like pivotal moments.

Your latest album Young Enough has been out for almost six months now.  How do you reflect on the album at this point?

I feel grateful that I still feel really proud of that record. Sometimes when you release something and then play the songs every night for many months, you start feeling less and less connected to it. I still love Young Enough and I think some of the songs continue taking on new meaning for me as we get further out from writing and recording it, and that’s been really nice, to kind of grow alongside the record.

At what point do your minds start moving towards another album?

We’ve already started writing new songs! I think we all really love the writing process and can’t wait to get back into it.

I usually start with a lyrical idea and then work backwards to pair it with a melody and come up with an arrangement for it. My brother, who plays drums and also writes songs in Charly Bliss, writes the opposite way, so there’s always a point where we meet each other in the middle.

How do you feel that your sound and writing has evolved since you first came together, particularly heading into Young Enough.

I think we’re getting better and better at making the music we want to make, and feeling comfortable being ourselves and being honest and vulnerable lyrically. Our sound is definitely moving more in the direction of pop, but that feels like a pretty natural progression because we’ve always written really catchy melodies.

Your run of dates in the UK comes ahead of shows in the US, Canada and Singapore.  What do you have planned after you get off the road?

Its been a whirlwind of a year and I think we’re all really excited to spend some time at home and write as much as we can!!