In Interview: Eliza and the Bear 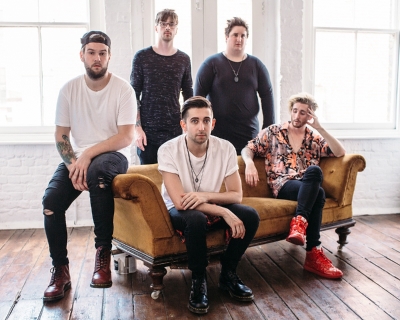 London quintet Eliza and the Bear (James Kellegher, Callie Noakes, Martin Dukelow, Chris Brand and Paul Kevin Jackson) have been whipping up quite the proverbial storm since bursting onto the scene at the end of 2013, winning a legion of fans whilst supporting Paramore and Twin Atlantic.  With their EP Light It Up seeing huge support and critically acclaimed singles It Gets Cold (a song which formed the soundtrack to the BBC’s Sochi Winter Olympics Coverage), Brother’s Boat and Friends (used on the Bulmers Cider summer advert) under their belt and hugely lauded, it’s already been quite a year and now they are in the midst of a 20 date headlining tour of the UK which sees them performing at Manchester’s Ruby Lounge on 6th October.

Their live sets have certainly earned them an outstanding reputation – full of energy, huge soaring choruses which threaten to lift the lid off any venue and incredible euphoric hooks.  It’s these infectious gigs which have helped turn the likes of Fearne Cotton and Zane Lowe into fans, championing them at every opportunity – and justifiably so.

We got a few words with the band in anticipation of their upcoming gig.

Your sound represents a departure from the musical stylings of previous bands you have been in.  Do you find yourselves influenced by or fighting against previous incarnations or have you gone through a natural progression?
It’s been a natural progression for all of us, growing up musical tastes mature. We are still influenced by the older styles of music we played, we spent many years writing like that so it will always find its way into what we do now.

You have built a strong reputation for outstanding live gigs.  What’s the secret?  And how do you approach each gig to make sure it’s as good as people are coming to expect?
We just have fun! Playing live is our favourite thing to do, if we aren’t enjoying ourselves why would anyone else. If someone watching you, sees you having the time of your life, they will get immersed in that feeling. And we like to play loud, the louder the better. And strobes, strobes and more strobes.

Do any gigs particularly stick in your minds?
Festivals are always great, you head onto stage with a point to prove. But any of our headline shows stick in my mind. Having people pay money to come and see you sing songs you’ve written is mad. Hearing people sing back the lyrics to me is sick.

Do you have any pre- or post-gig rituals?
Few beers, some wine to loose the nerves. I usually get really tired before a show, I have no idea why. As soon as you walk on stage I’m wide awake.

How did it feel to be handpicked by Hayley to tour with Paramore?  How did the tour go for you?
That was nuts, I never expected when we started this band that we would play Wembley Arena within 18 months. Its still something that baffles me, it feels like someone else did it. The tour was amazing, we were definitely dropped in at the deep end, someone told me that there were more people at the first Paramore show, than we had collectively played in front of, before that point.

What’s the best thing about playing live for you?
The energy, it gives you a massive buzz. Something that you can’t really recreate anywhere else.

What do you particularly like or dislike about touring?
I love playing shows obviously, being with a group of your mates and being at “work” is pretty cool.  I don’t really like waking up in the morning, 9/10 times I’ll have a severe hangover.

What’s next for Eliza and the Bear?
Album recording is fast approaching, I can’t wait to hear it. We’ve been working so hard writing over the past year, its time to hear the fruits of our labour.

Eliza and the Bear play at Manchester’s Ruby Lounge on 6th October 2014.