In Interview: Arkells – “When we trust our instincts, it’s generally paid off for us” 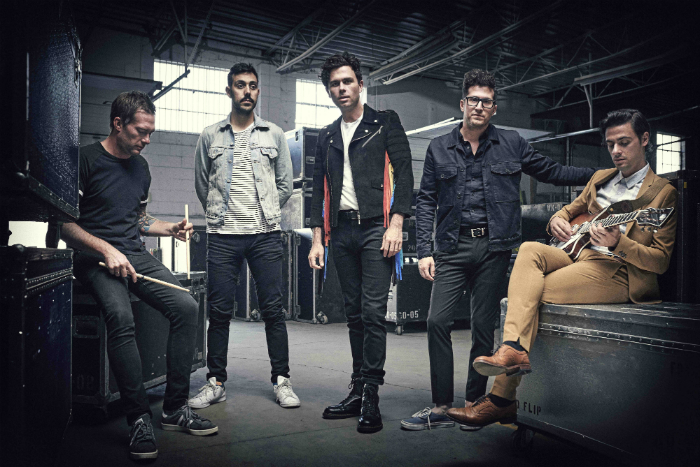 With Arkells’ upcoming album Rally Cry set for release on 19 October, the band hit the UK for a run of dates just a few weeks later.

Their seven date UK tour sees the Canadian 5-piece performing at Manchester’s Club Academy.  And it marks a welcome return to these shores for the band who performed alongside Frank Turner earlier in the year as he hit the road, returning the favour on their recent Canadian dates.

Rally Cry was initially teased in the spring with the release of politically charged People’s Champ and follows the band’s 2016 release Morning Report.  The album’s release is set to top a massive year for the band, which, in June, held their very own community-curated festival ‘The Rally’ for a crowd of 24,000 at Tim Horton’s Field football stadium in their hometown of Hamilton.

“No one is particularly precious”

“Typically it starts with a very terrible voice note” Max reveals as we discuss how the album was put together. “I’m at home with my out of tune upright piano, and I cobble together some semblance of a song.  It’s very trash, but there’s a nugget of goodness that I hope the dudes will be able to hear. It’s gotta be something I’m fired up to sing about. If you don’t care about the subject matter you won’t be able to sing it in the studio. From there, the guys get their hands on it, and start whipping up ideas on their own. Being able to work on your own part, and not being hovered over by 4 other band dudes, is an important thing to recognize. We didn’t do too much pre-production in a room together. We just got in the studio and started hacking away at the arrangement and production, and built the song up. Everyone has a say in all the parts – I really appreciate when the guys help me with lyrical phrases and editing. No one is particularly precious.  For me, it’s the best way to hear all the parts and get a big picture sense of where the song is going.”

The album covers a variety of themes, inspired by the people in Max’s life and their stories which relate to his.  Rally Cry touches on shame (Hand Me Downs), tribalism (American Screams), mental health (Only For A Moment), friendships (Don’t Be A Stranger) and, of course, Trump (People’s Champ).

Their approach to Rally Cry has differed slightly to previous album Morning Report.  Out are the co-writes and multiple producers.  Although Max describes it as a fruitful experience, he explains that they wanted to keep things more uniform, “This time around we liked the idea of keeping a central vibe. We worked in the same studio in Toronto and with the same producer – Eric Ratz. He’s an amazing producer. He’s a great communicator and listener. Great instincts and  how to speak every one of our languages: English, Bassish, Drumish, Guitarish, keyboardish,  singingish”

Written between tours, the band started putting Rally Cry together last September, completing it some nine months later.  “I like being able to go back and forth between the studio and touring – if you do too much of either it can get stale” explains Max about the timing. “I find we have the best energy in the sessions immediately after we get off the road. One of the last songs we recorded was Hand Me Downs – and we did that tune the minute we got home from our UK tour with Frank Turner.  It’s always a mystery, writing and recording a song: but you trust the process. Trust that everyone gives a damn, and is creative and capable and doing their best.”

Arkells had previously commented that the boldest and most gratifying ideas were the ones where they took the biggest chances.  So, of course, we want to know what about the biggest chance they have taken with Rally Cry.  “We sampled this South African artist Chicco” answers Max, “It’s an amazing song, and we built Relentless around it.”

“I don’t think of myself as a ‘rock musician'”

Of course, there aren’t too many samples used in rock music, so why did they chose to do this?  The answer slightly surprises us, “Even though we’re very much a rock band at our core” continues Max, “I don’t think of myself as a “rock musician” – a lot of the music I listen to is outside the genre. I grew up loving hip-hop and always marvel how they build songs around old samples. I love the site whosampled.com – that allows you to see where beats came from.”

It’s an unusual step, but one which works.  Max had previously told us that when they trust their instincts it’s generally paid off – and he’s right.  The sample blends perfectly in the album’s lead track to form an afro-pop, keyboard driven rock track.

Telling us the story behind Relentless, it’s obvious just how personal the track is to Max. “I was thinking about my folks, and the people in my life that give me strength.” he tells us of the subject matter behind the track, “Finding resilience in life can come in variety of forms – rejection and failure is often a good source of resilience – but in this song, it’s about tender love and affection and understanding.  The chorus comes from a conversation I had with a friend, Paul Langlois of the Tragically Hip. We talked about being in a band, and how much of life you experience together, and the idea of being there for each other. His band’s singer – Gord Downie – recently passed away of cancer, and Paul said that through everything, Gord was “Relentless, like a dog on a bone.” I love that old expression, and it made its way in to the song.”

Following the release of Rally Cry, Arkells will head over to the UK for a run of dates.  They return to Manchester for a gig at Club Academy on 22 November.  And Max is clearly looking forward to getting back to these shores.  “The shows in the spring with Frank were dynamite – his audience was the perfect formal introduction to playing proper UK shows” he enthuses.  And for anybody who missed out on those shows, he tells people what to expect whilst he can’t help but return the praise Frank Turner heaped on them, “We’re like Frank Turner, but better. Just kidding. Frank’s one of the most inspirational people I’ve met in this business. His ethos as a working musician is so admirable and I think about his career path and choices he makes as a guiding light.”